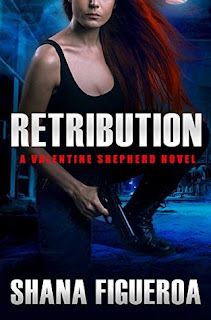 Private investigator Valentine Shepherd plays by one set of rules: hers. She's haunted by dark, cryptic visions of the future, not to mention an aching hole in her chest where her heart---and the love of her life, Max Carressa---used to be. But when Val's search for a missing woman leads to her own night of terror, the only thing on Val's mind is revenge.

In the months since Val walked away from their relationship, Max has tried to move on. Yet, when she asks for his help tracking down her attacker, he knows resistance is futile; he'll do anything for Val. Even sacrifice himself to save her.

Valentine Shepherd is on the move again.  Since breaking off her relationship with the gorgeous billionaire Max Carressa, she has gone on a downward spiral straight to hell.  Drinking herself into a stupor to relieve the heartbreak, she throws herself into her work and uncovers a secret society of the super rich whom partake in disgusting acts and falls knee deep into a dark and scary as shit rabbit hole.  Can Val change her future and come out the other side alive, or will she literally end up in her own worst vision?!


The story picks up with some time passing since Val broke up with Max.  Her drinking habit has increased to a dangerous level and she has fallen into bed with her enemy Sten to "relieve the pain".  During her time spent with the shit bag, Max has gotten engaged to a high society princess and has appeared to gotten over Valentine.  When Val is hired by a frantic mother to find her missing daughter, she gleams the girls future to only end in her death.  Determined as hell to save her, she goes undercover to find out the girl was a "call girl" and disappeared after attending a Blue Serpent party.  While pushing the limits to find out more, Valentine herself is thrown into the same nightmare the missing girl has been in and now suffers serious repercussions for it.  The only person she believes can help her is none other than Max, and because he never got over Val he jumps at the chance to be near her once more.  Once the duo begin prodding into the unknown, the conspiracies, torture, and murders begin.  Val's missing persons case turns into so much more than she bargained for and had me on the edge of my seat with each plot twist!


Valentine and Max were meant to be together in my eyes.  They have this unbelievable bond that yanks the on your heart strings, and with their ability to see the future they should be a force to be wreckened with!  Despite their powers, the "Alpha" still tries to control their fate.  With secret agents working against the couple I'm not sure how they've not ended up dead already, I mean wow!  The shit these two have been through both together and separately, it's amazing they are still in one piece!  Sten's return into Val's life was unexpected and the fact that he appears to act like he genuinely cares for her turns me from a hater of the piece of shit, (cause of what he did in book 1) to actually liking him now, (which really pisses me off!)  I fucking "like" Sten now...damn it!  He helps Val hone in on her visions, and rocks her world in bed, along with seeking revenge for her after he finds out what happen to her.  Damn, shit, fuck!  I LOVED hating him!  But alas, I have a new person to hate now, haha!  I will not reveal the knew bad person, but lets just say you will be shocked as hell!  And I am so torn right now about whether this book is better than the last.  Both books blew me away, but this one seemed much more intense...maybe because I've bonded with Val and Max, maybe because of how this investigation turns out, idk.  All I know is this is a 5 Fang story through and through.  From beginning to end I was literally glued to the story.  This part of the story does have a happy ending, but I know not for long.  We will see how long that happily ever after part plays out in the next book Reckoning.  I whole heartedly recommend this book to any paranormal romance suspense thriller lover!

ADD TO YOUR GOODREADS SHELF:  https://www.goodreads.com/book/show/30364189-retribution