Book Review On Sudden Backtrack, (The Hollows #13.1)
By Kim Harrison 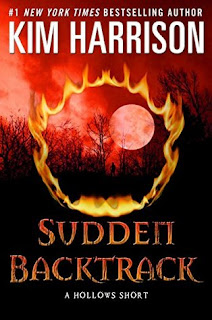 The origins of the elf and demon war have been shrouded – until now. Told from a demon’s point of view, join Al as he helps Newt spin the curse that caused the elven downfall… and perhaps holds the beginnings of their own reclamations.

Sudden Backtrack takes us back in time to when the Elves still enslaved the Demons. During the course of The Hollows series, certain facts about Trent and his Elvin kin's past had been revealed. However, most of these facts trickled out drop by drop throughout the series, until the slave ring. It was a pretty harsh reality for Rachel when the ring was discovered.

Going back to witness how and when Newt, Gally, and Dali conspire to lay a curse upon their captures that will devastate the Elvin race as they know it was all kinds of emotions. Liberating, is the most profound word I felt while reading this story! To read how the demons where treated, how little they were able to enjoy, and just live was really sad. Being shown this part of the demons and elves history, gives me a deep appreciation and understanding of their relationship in the present time of The Hollows series. If I would have known then, (back when reading The Hollows series) what I know now, my perception of The Hollows series would be completely different!

Sudden Backtrack is not just another short story that entails a small tidbit about a random character from a major series, IT IS their BEGINNING. Sad and cruel as it may be, it is where it all started. If you ever were a fan of The Hollows, then you will pick this book up and read it. Make sure you just don't read it on your lunch break, appreciate the fuck out of this and devote the time, emotion, and space it deserves.

ADD TO YOUR GOODREADS SHELF:  https://www.goodreads.com/book/show/23261562-sudden-backtrack