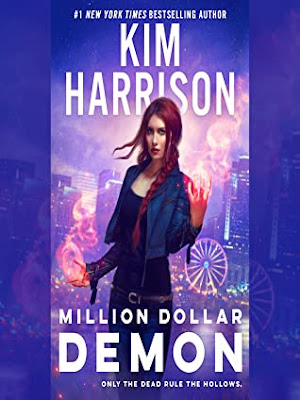 The new master vampire of Cincinnati has arrived . . . and she wants Rachel Morgan out. No matter where Rachel goes, Constance is there—threatening Rachel's allies, causing city-wide chaos, and, to add insult to injury, even forcing Rachel out of her current quarters. Ever since Rachel found a way to save the souls of vampires, the old undead's longtime ascendancy has been broken. Now Constance sees eliminating Rachel as the key to consolidating her own power.
Rachel has no desire to be enthralled or killed—and she's terrified of what may become of the city if Constance forces a return to the ancient ways. But even a witch-born demon can't stand against the old undead—at least, not alone. And if Rachel refuses to claim the role of Cincinnati's master demon, the city will tear itself apart, taking her and all those who stand beside her with it.

After losing Biz's soul and pissing Al off by associating with Houdon, Rachel Morgan, the witch born demon, is back in the hot seat with yet another power hungry city official, newly appointed Master Vampire Constance. With the inderlanders being evicted left and right by Constance and her brigade, Rachel must come up with a way for all to live in harmony, or die...again.

Let me start out by saying, if you haven't read any of the books in this series I must ask, WHY THE FUCK NOT?! If you “claim” to be an urban fantasy lover, than get off your ass and start reading! I was on the edge of my seat, screaming, and jumping up and down throughout most of this book in excitement. I was outraged when I would pull up to work in the middle of a action scene, screaming NO as I turned my audiobook off and clocked in. I couldn't wait to get off work and hit play. I would be running to my car, lol. I haven't been this excited about a book in a long time, it was great! Jinx's hilarious comebacks and comments had me laughing, Rachel's almost underwhelming “plans” had me anxious, and that crazy psycho bitch Constance made me angry. I wanted Rachel to best Constance in the most humiliating savage way so bad that I could taste it.

We had a new character introduced to the story, Pike. Pike is Constances right hand vamp, and such an arrogant prick. BUT, as the story went on, Pike almost appeared as if he had turned in Rachel's favor, but then would do some back stabbing shit. The unpredictable actions of Pike was wearing on my nerves. I didn't know if he was going to be a friend or foe. Pick a fucking side Pike! Ya, I yelled a lot in my car, lol. In the end, I don't think I have ever felt so satisfied of the outcome as I have with Million Dollar Demon. Thank you Kim Harrison for giving me a reason to read!

Marguerite Gavin is a brilliant actress! I love her so much. She brings The Hollows to life for me.