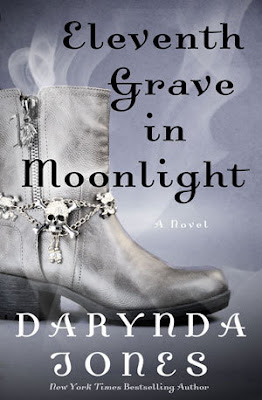 A typical day in the life of Charley Davidson involves cheating husbands, missing people, errant wives, philandering business owners, and oh yeah...demons, hell hounds, evil gods, and dead people. Lots and lots of dead people. As a part time Private Investigator and full-time Grim Reaper, Charley has to balance the good, the bad, the undead, and those who want her dead. In this eleventh installment, Charley is learning to make peace with the fact that she is a goddess with all kinds of power and that her own daughter has been born to save the world from total destruction. But the forces of hell are determined to see Charley banished forever to the darkest corners of another dimension. With the son of Satan himself as her husband and world-rocking lover, maybe Charley can find a way to have her happily ever after after all.

Charley Davidson Private Investigator and The Grim Reaper have a big pill to swallow and digest. She has just learned her Godly status, her daughters destiny, and still can't figure out how to get from A to B with her superpowers....amateurs! With an unruly God on the loose, and BEP in constant danger, when will Charley find the time to train with her uber gorgeous husband Reyes?!

Charley's outlook on her existence is taking her some time to digest. Her perception on life was much simpler before Reyes, but at the same time not really. See Charley knew she was a grim reaper before Reyes, but she didn't know all the how to's of it, and never knew the why. Doing her job with the blind spot was more difficult for her, or should I say challenging, but it made her cases interesting to say the least! Now that she has married Reyes, had a child with him, and unlocked most of the secrets to her existence, she now has the challenge of staying true to what she believes.

While Charley is trying to figure out how to trap the evil god on the loose, she is investigating the people that adopted Reyes, and then abandoned him to the bastard that tortured him throughout his whole childhood upon their son's request. This does not make Reyes happy, and he is constantly badgering Charley to drop the case. Uncle Bob is being extremely distant from his new wife Cookie, giving her the impression he is cheating on her, and Osh is still recovering from taking on Charley's soul so the god she was hunting didn't see her damn light coming. BEP is still in hiding with a loving couple that is raising her, and being her BEP self. The whole gang is here but Gemma. Where the hell is Gemma? Oh well....Everyone has a part in helping Charley, Reyes and BEP and the closer they get to defeating the riff raff that want to open all the portals to various hell dimensions, the more intense and dangerous everything gets for the entire gang. With each new layer that unfolds, I fall deeper and deeper in love with Charley's journey. The ending has a cliffhanger, but then again so do all Darynda's books in this series. Look out readers things are getting dicey!

Lorelei King is the lovely narrator for Eleventh Grave and doing a bang up job! She never ceases to amaze me with her fabulous talent. Lorelei brings Charley to life for me, and I thank you for the memories.

Add to your Goodreads shelf:  https://www.goodreads.com/book/show/30980818-eleventh-grave-in-moonlight