Audiobook Review On Big Vamp On Campus, (Half Moon Hollow #5.5) 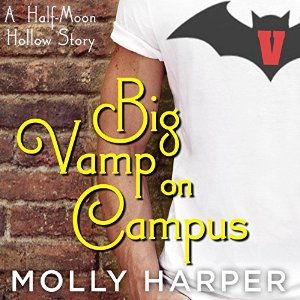 You've asked for years when Ophelia and Jamie would get their own story and now it's here! How will Ophelia adjust to living in a dorm room now that she has been banished from the Council and forced to matriculate at college with Jamie? Communal showers! Horrible, pretentious roommates! Humans who try to be FRIENDS! The horror!

Big Vamp On Campus is a short story about Half Moon Hollow's weirdest couple, Ophelia and Jamie. Ophelia is over 400 hundred years old and falls in love with an 18 year-old boy from a small town. Jamie is your typical 18 year old and Ophelia is a scary as all get out ancient vampire. Ophelia is used to having power, money, and doing whatever she pleases, until the vampire council banishes her! After much contemplation, Ophelia is sent to college with Jamie. She is forced to live in the dorms with vamps and humans mixed, and to....*gasp* socialize! What could possibly go wrong?

I have been a big fan of the Half Moon Hollow series from book one, The Care and Feeding of Stray Vampires, and this short about Ophelia does not disappoint! Ophelia's character was always portrayed as powerful, mysterious, and just out right scary as shit! In this chapter of her life, we learn the softer side of Ophelia. It's a interesting turn of events for Ophelia, and her slow intervention had me laughing my ass off the whole time! The wit and sadistic humor falls in line with Harper's previous work and had me eating out of the palm of her hands. I can't say enough about this series, or the very clever way the author writes irony and a love story within the same book. It's paranormal, it's comedic, and it's romantic all rolled into one sassy little package.

If you ever would like to listen to a paranormal romantic comedy, this would be the series to start with! It's funny, smart, sexy, and romantic, and I would and have made them my go to books when I'm in a Harper state of mind. I do believe I coined that phrase!

Narrator Review
Amanda Ronconi is the narrator for Big Vamp On Campus and for all the books in the Half Moon Hollow series thus far! Amanda has a natural talent and I absolutely love her! She just has the best tone of voice, and comedic timing ever! I have been a fan of Ronconi's for some time now, and would listen to anything she does. I give Ronconi 5 pearly white fangs!