RELEASE BLITZ: LAMENT OF THE FALLEN


Release Blitz For Lament Of The Fallen, (The Last Bucelarii #2) by Andy Peloquin 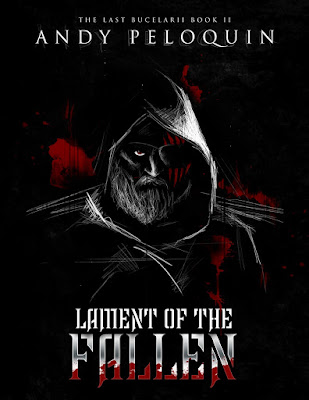 A faceless, nameless assassin. A forgotten past. The Hunter of Voramis--a killer devoid of morals, or something else altogether? (The Last Bucelarii--dark fantasy with a look at the underside of human nature).

The Hunter of Voramis is no more.


Alone with the bloodthirsty voices in his head, fleeing the pain of loss, he has one objective: travel north to find Her, the mystery woman who plagues his dreams and haunts his memories.
When he stumbles upon a bandit attack, something within urges him to help. His actions set him at odds with the warrior priests commanded to hunt down the Bucelarii.
Left for dead, the Hunter must travel to Malandria to recover his stolen birthright. There, he is inexorably drawn into direct conflict with the Order of Midas, the faceless, nameless group of magicians that holds the city in a grip of terror. All while struggling to silence the ever-louder voice in his mind that drives him to kill.
From feared assassin to wretched outcast, the Hunter's journey leads him to truths about his forgotten past and the Abiarazi he has pledged to hunt. His discoveries will shed light on who he really is…what he really is.
Fans of Joe Abercrombie, Brandon Sanderson, and Brent Weeks will love the Hunter…


ABOUT THE AUTHOR
Andy Peloquin: Lover of All Things Dark and Mysterious

Andy Peloquin--a third culture kid to the core--has loved to read since before he could remember. Sherlock Holmes, the Phantom of the Opera, and Father Brown are just a few of the books that ensnared his imagination as a child.

When he discovered science fiction and fantasy through the pages of writers like Edgar Rice Burroughs, J.R.R Tolkien, and Orson Scott Card, he was immediately hooked and hasn't looked back since.

Reading—and now writing—is his favorite escape, and it provides him an outlet for his innate creativity. He is an artist; words are his palette.

His website (http://www.andypeloquin.com) is a second home for him, a place where he can post his thoughts and feelings--along with reviews of books he finds laying around the internet.

He can also be found on his social media pages, such as:

10 Things You Need to Know About Me:

A Few of My Favorite Things

"Creative, gritty, and beautifully dark...fantasy addicts will love it!" -- Peter Story, author of Things Grak Hates -- http://peterjstory.com/
"The fantasy world has a compelling new antihero…the Hunter will terrify and captivate you." - Eve A Floriste, author of Fresh Cut
"From the first words on the page this fantasy holds the reader spellbound even after the book is finished…his character is very well-defined even if his past is a mystery. Root for an assassin? Oh, yes, one must!" -- Carol Conley, for InDTale Magazine
"Oh the carnage! Fantastic bloodthirsty carnage! The fight scenes in this book were fast-paced, detailed and thrilling. I love a good sword fight and there is plenty of that here." -- Ami L. Hart
"One could get lost in this novel for its twisting plots, seemingly endless imagination, dark yet irresistible characters, or the mind-numbing paradox of its simultaneously dark and romantic world. One could follow the long and winding road of the dusky, fierce protagonist and fight tooth and nail not to sympathize with him. One could dance in the dizzying, intricate circles of Peloquin's neo-mythology, or even basque in the black sunlight of a well-crafted gothic novel that both entertains and enlightens." -- Jesse G. Christiansen