By +Molly Harper  and Narrated by Amanda Ronconi 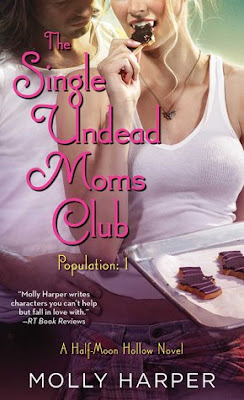 Widow Libby Stratton arranged to be turned into a vampire after she was diagnosed with late-stage cancer. It wasn’t the best idea she’s ever had, but she was desperate—she’s not about to leave her seven-year-old son to be raised by her rigid, overbearing in-laws.

With the help of her new vampire circle, Libby negotiates this unfamiliar quagmire of legal troubles, parental duties, relationships, and, as always in Harper’s distinct, comedic novels.

Libby Stratton is a single mom struggling with late stage cancer and some over bearing in-laws. During her chemo treatments, she has devised a plan to become a vampire so she can continue to raise her son Danny...well that was the plan. In the Hollows it is highly frowned upon to place an ad on Craigslist for a sire, and illegal to pay a vampire to turn you, so the result was doomed for hilarity and much confusion for Libby while she tries to adjust to her new situation.

If there was such a real place as the Half Moon Hollows, I would be there! Vampires are real and out of the closet. They have sexy, single men a plenty, and in everyday life, the funniest shit happens! Libby had the short end of the stick in life, with a dead husband and bossy in-laws, but she has one helluva kid that she adores. Of course she couldn't imagine leaving him alone in this world, with old people whom were try to groom him into the mirror image as their son. So when she planned on turning (vampire) she didn't take into account how her friends and in-laws would react or deal with it. All that mattered to Libby was her son Danny. When Libby rose from the dead and tried to resume her life, well the PTA ladies didn't take to kindly to her, and insert hunky dude here <>. Wade is a single father to Harley, who happens to be the fast best friend of Danny's. Wade and Libby meet in a closet, and true love blooms from there. The two have a snarky and rough start to each other, but he seems to be the only one not judging Libby for her decision.

My two favorite people from this funny and awesome series make an appearance as Libby wakes....Dick and Jane! Together with the rest of the gang, and a support group, Libby finds herself in the middle of a fast growing group of friends. I really enjoyed the fact that Jane and Dick not only were there to teach Libby how to be a vampire, but they were caring and supportive on a personal level as well. The plot and twist were ingeniously written to be amusing as well! Although there was some seriousness to the plot, how things happen and went down were just too good not to listen to twice! I love, love, love this book, and series to the nth degree! I will highly recommend this series and book to anyone who will listen.