Audiobook Review On:  Ren:  The Monster Inside The Monster, (Ren #3) 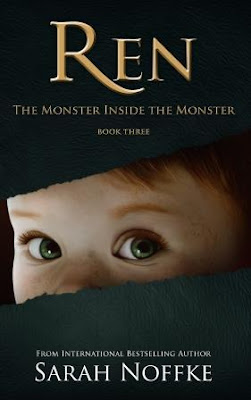 In this third and final installment, the monster in Ren will have to do the unspeakable. He will have to evolve. Nothing in his life can be approached employing any of the strategies he’s used before. The evolution of Ren might be his undoing, but it might also be the one thing that brings him real happiness.

Ren's new found daughter Adelaide is with child, HOLY SHIT! Still working on how his daughter will fit into his life, Ren is blindly bitch slapped with the news that his accident is having an accident. Good Lord help us all!

Ren and Dahlia had just gotten back together when Adelaide showed up to throw a monkey in the mix. Having a mini me wasn't working for Ren at all, but she grew on him, like an unwanted goiter. Just as the happy father/daughter duo started relaxing into their new relationship, Ren finds out from Trent that she is pregnant. All the while, Ren is still hunting down the notorious Vivian, this weeks villain. I have to say, just when I thought Ren was beat, by both his daughter and Vivian, he goes and has hindsight! The plot twist was fucking brilliant, and I loved every minute of it! The drama Adelaide served with her newborn was very intense, and unpredictable. I really appreciated how the story stayed true to the real world in regards to Adelaide's postpartum depression. Adelaide felt abandoned by Ren and her mother, so it is natural that she not have any maternal instincts for her own child, or even know how to raise him on her own. The entire family dynamic is really screwed up, but their hearts for one another are there, just buried under a lot of negative memories.

In the end, I was brought to tears, whether sad or happy I will not say. You will have to find out how their story ends for yourself. I highly recommend the Ren series because it has been the most insightful and real book to date...for a fictional story that is, and he says a lot of bad words, which is right up my alley!

Tim Campbell returns to narrate for Sarah Noffke, yay! We almost lost him back on book 2 production, but with the help of her fans and friends, we were able to beat Tim into submission. Tim performs on a 5 Fang quality level with every performance! His hard edged brilliant tone for Ren is spot on, and he is just such a great story teller. I love Tim's British accent, (I have no idea if he's British) and I could listen to him all day! Great job Tim!