Audiobook Review On Where The Wild Things Bite, (Half-Moon Hollow #5) 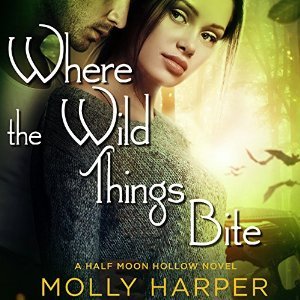 Delivering a rare book to a valued customer is definitely part of mild-mannered archivist Anna Winthrop's job description. You know what isn't? Protecting her precious cargo from mid-flight theft by the very pilot who is flying her to Half-Moon Hollow...while trying to appear as unappetizing as possible to the only other passenger, a vampire. Undead bookstore owner Jane Jameson could be waiting a very long time for her book. Possibly forever.

Anna Winthrop is an archivist hired by Jane Jamison, from the Hollow's, to deliver a special and rare book to her door. Unbeknownst to the two book enthusiasts, the book was worth killing for! As Anna survives a plane crash and wonders through unknown woods in the middle of Nowhere, KY she is forced to face her inner most demons, and learn to roll with the punches in order to survive... a second time.

Anna is human and hired by Jane, a vampire, who's head of the Vampire Council no less. When she boards a small engine plane to deliver the book, she is met by a rather handsome but also chatty vampire by the name of Finn. Yes, Finn Palmeroy from TheSingle Undead Moms Club book, that Finn. As soon as Finn was identified, I should have known better! If you have been keeping up with the series, then you know the reputation Finn already has in the vampire community. However, to give Finn some due credit, he was kinda fucked over in the previous book. Although he did turn a human in an illegal manner, he didn't take advantage of her...much. He's the kinda person that skirts the line between good/bad, but with his handsome features and charming personality, how could you be mad at him!

With Anna's neurotic nature from her psychotic mothers upbringing, this match up just had to happen! Anna needed to learn how to live, I mean really live, only like Finn could show her, and Finn had to learn discipline when it came to rules, and laws, right/wrong kinda stuff that only Anna could teach him. I loved Anna's back story, and the way she was when Finn wasn't awake. The whole experience was funny and sweet. I must admit this is a definite re-read!

Narrator Review
Amanda Ronconi! Now I'm just looking shit up to say about you because REALLY? You are just so fantastic! Wonderful, funny, talented, versatile, and I just love you : )