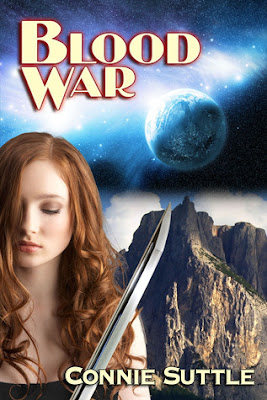 Death has come to Le-Ath Veronis. A would-be assassin, aiming at Lissa, kills someone close to her instead. A price has been placed on Lissa's head by Black Mist, an assassin's guild who have been paid by a reassembled Solar Red. Throw in a spin-off religion, betrayal, a misguided kidnapping and the Five-Year Conclave for the Reth Alliance, and you have the seeds of war.

Queen Lissa is in for a bloody and emotional war, is she prepared?

Situations have been building up to an impeding war, and something more with Lissa, and now the other shoe has finally dropped. With so much conflict spanning over many different planets, how is Lissa supposed to keep order?! Her power is mighty but she is only one, the one that was meant to calm all the chaos...but how?

From the moment we found out Lissa was more than a vampire and had a seriously outrageous destiny, I knew nothing but trouble was coming. From the time Lissa was born she has had nothing but heart ache, pain and suffering at the hands of “loved ones”, even now, as Queen, she is still forced to eat shit. I've had to suffer in silence over the injustice that has befallen my friend Lissa over the eight books in this series so far and my heart has just about given up on hope. Lissa's father is at the heart of all her woes, and he is on everyone's shit list now a days. When Lissa finally reaches that emotional point of despair, that is when she will discover and unleash the ultimate power she's been capable of, and that is when all the wrongs will be righted, or she'll just say fuck it and be gone! Either way, look out enemies of my enemy.

The upcoming war, and Lissa's future has me on pins and needles, and if it wasn't for life getting in the way, I would be binge listening to the very last book. I can't even begin to imagine how Lissa's story will end, but man ol' man, if I know this author, it will be a doozie! Strap on your big girl panties, cause heads will roll!

Traci Odom continues as the narrator for the Blood Destiny Series, and I am still in love with her :) She is the most amazing and talented performer that I have thoroughly enjoyed listening to. There are narrators then there are story tellers, and Traci will just blow you away with the way she delivers this story of a lifetime to you.

ADD TO YOUR GOODREADS SHELF:  https://www.goodreads.com/book/show/9630924-blood-war