Book Review On The Sweet Oil of Vitriol by Daniel Eagleton 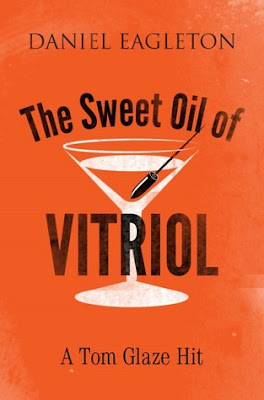 Ever get the feeling the staff want to kill you?

After a government sanctioned hit goes spectacularly wrong, Mossad agent Thomas is blamed for the mission’s failure by his superiors, ousted before completing his very first job. Desperate to prove himself, Thomas accepts an offer from his former handler, Yakov, to assassinate Jacob Okonjo, the head of the African Union. It seems Jacob is allowing certain parties to control Africa’s lucrative diamond trade, and in doing so has made some powerful enemies. But like that Mossad hit-team caught on camera in Dubi a few years back, how is Thomas supposed to terminate such a prominent figure without being caught on CCTV? The answer: to work undercover as a room-service waiter at a top London hotel, where, in a few months’ time, Jacob Okonjo will be staying. It’s the perfect plan. Jacob is to be administered an untraceable poison, and afterwards, even if there is an investigation, a trusted member of staff like Thomas will be above suspicion. That’s the idea, anyway. In the meantime, he’s to suffer month after month of boring, menial employment, serving rich, famous people dinner, when he should be making a name for himself amongst the intelligence community. Because you can bet this never happened to Bond or Bourne. Never had to work for tips, subjugating themselves like some average, everyday citizen...

Thomas Glaze is a government man gone “private sector” after a botched mission. After the failure of his first mission out, he struggles with is inner demons along with the fight for control of his own destiny. Will Thomas find the peace and harmony he is searching for, or will he crash and burn?

Thomas's story took me right into the conspiracy theory of it all just like any paranoid book geek lover. I jumped into the rabbit hole with Thomas only to find truths that I wasn't ready for. Thomas was smart, strong, confident, but during his first mission he made a crucial mistake that I can only describe as a one in a million shot. The entire scenario is too stupid to be unbelievable, but one for the Myth Busters for sure! After the “incident” Thomas's boss Yakov notifies him that headquarters is placing the blame on him and you're fired. Well that sucks. But the good news is Yakov is a sneaky bastard that had in the works his own business, so hey Thomas, I have a job for you if your interested... All in all, Thomas had to deal with his own recovery, and the mind fuck that his own outfit would shun him like that, and basically leave him no choice but to go commando on them. During his new mission, he meets some interesting characters, and forms unexpected relationships with them. While undercover he finds ways to complicate the outcome, and made the ride a one way ticket to his own independence.

Thomas's character was your typical dude mentality, but with an edge. He was smart with a psychology degree, combat and weapons trained, and a mind as sharp as a trap! During his mission I was able to see him for the smooth operator he truly could be in a highly intense stressful situation. He definitely was the man you wanted on your team when the shit hit the fan. His team mate Uri was a good guy. He was more tech support than field agent, but he stuck by Thomas's side like a true friend, even though at times he did come across as a flake. Yakov was a wolf in sheep's clothing. I hate people like that, but he played his part well cause I do loath him. The plot twist was played out nicely, with just the right amount of danger to keep me glued to my Kindle. The pace was a bit slow, but there was a lot of character development involved with him. In the end, implications were left about his next mission leaving me with a need for more. Tom Glaze was a great thriller from a new to me author that I will definitely keep on my radar!  And although I did thoroughly enjoy the story, the slow parts did sway my rating a bit and presented a conundrum.  Since I don't do half stars, I always go down thus the 3 Fangs.  Just let me tell you the struggle was real!

ADD TO YOUR GOODREADS SHELF:  https://www.goodreads.com/book/show/34387600-the-sweet-oil-of-vitriol