Audiobook Review On Shadow of Night, (All Souls Trilogy #3) 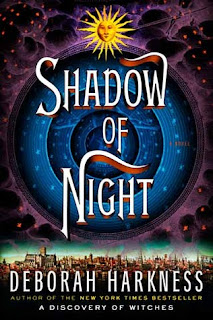 Historian Diana Bishop, descended from a line of powerful witches, and long-lived vampire Matthew Clairmont have broken the laws dividing creatures. When Diana discovered a significant alchemical manuscript in the Bodleian Library, she sparked a struggle in which she became bound to Matthew. Now the fragile coexistence of witches, daemons, vampires and humans is dangerously threatened.

Seeking safety, Diana and Matthew travel back in time to London, 1590. But they soon realize that the past may not provide a haven. Reclaiming his former identity as poet and spy for Queen Elizabeth, the vampire falls back in with a group of radicals known as the School of Night. Many are unruly daemons, the creative minds of the age, including playwright Christopher Marlowe and mathematician Thomas Harriot.

Together Matthew and Diana scour Tudor London for the elusive manuscript Ashmole 782, and search for the witch who will teach Diana how to control her remarkable powers.

Diana Bishop is on the run. With Matthew at her side, they seek Ashmole 782 in hopes that they can bridge the gab between the witches, vampires and demons. Diana and Matthew have done the unspeakable according to their kind, and are now being hunted. The magnificent duo have traveled to 1590 London in order to find shelter from those whom wish them harm as well as seeking the truth. Will they find what they are looking for in time, or will Diana get burned at the stake?

The majority of the story takes place in 1590 London, where Matthew's father is still alive, he's a spy for the Queen and a major asshole! Because of the whole time travel semantics, Matthew's 1590 self has ceased to exist, and the current day Matthew resides in his place along with Diana. Try explaining that without going into detail! They were met by his brethren, whom it took some doing before they believed Diana meant them no harm, but what about the rest of the people? While trying to adapt, Diana and Matthew struggle with finding a witch that will help her with her magic so they can return to their own time, as well as hunt down Ashmole 782. The time period, the world building, and the phenomenal attention to detail, the author has spun a magical tale of intrigue, with the underground of London, the Royals, and the nasty deceit. I truly enjoyed their journey in the past, especially the relationships formed while present. Although the manner in which Diana, (women in general) were regarded back then, I couldn't help but fall in love with those surrounding her and the love they felt for her in the end. I have to say my favorite part was a toss up between when Diana's father appeared, and the family type bond both Matthew and Diana developed with young Jack. The way in which Diana conformed to the times, and just seem to fit so seamlessly was amazing. It was like she was meant to be in that time and not the present.

Shadow of Night takes the cake with witches and the like. Having the witches born through blood line, and vampires not romanticized was refreshing. You get to see the darker side of these creatures as they were truly meant to, but in a way that does not frighten you but amaze you with the complex structure of their lives. Nothing comes easy to them, and they fight for what they have every step of the way! Their past was harsh, and ugly, and we seem to forget that little fact in the here and now. I wonder how our youth would fare if they were sent back to such a time. This story does make you wonder, another thing I love about this book. This chapter in Diana's life was not in the least boring, or slow. We accompany her through her teachings with a coven on how to tap into her magic, as well as learn about Matthew's past with his family. So you see, while reading you will be amazed, happy, sad, and scared from beginning to end! I highly recommend you read Diana's story, because you will never be the same after!

Jennifer Ikeda takes the helm once more for Deborah Harkness. With the complexities of this story, since it takes place in 1590, Jennifer took the bull by the horns and nailed it! She has such a great, rich tone to her voice, as well as being excellent with accents! I must point out that she did excellent with the voice she choose for one certain “Royal” whom I loathed. He was such a prick, and to his description, she did right by me with her portrayal of him. Jennifer once again gets 5 Fangs for her performance!

ADD TO YOUR GOODREADS SHELF:  https://www.goodreads.com/book/show/11559200-shadow-of-night