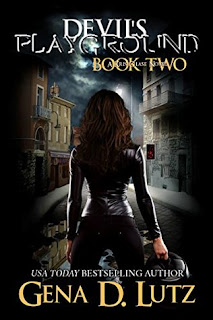 To repay a debt, necromancer Kris Chase finds herself slinging drinks behind the bar of a well-known supes club, Devil’s Playground. But that doesn’t mean her life has settled into anything resembling normal. Vampire kills are still on the rise, and now, a new enemy has surfaced...

Kris Chase is back and badder than ever! While tending to her new job at Devil's Playground, a bar for the supernatural community, a ghost of a recently deceased girl enters. Her dead body was found outside the bar and now the police are investigating her murder, shining a not so welcomed light on the bar and it's owner Devlin, aka Devil. After hearing the young girls story, and Devil himself needing the person responsible involved in it brought forth to clear his name, Kris is on the hunt. Can Kris find the killer(s) before more innocent young women die?

It's been three years and three months since I read Created Darkly,book 1 in the Kris Chase Series, so as I got deeper into the story my mind was refreshed with the who and what's but not about how much I loved the story until Kris was knee deep in her investigation. The beginning of the story had me at a loss, and totally disconnected. Kris's family structure is odd to say the least, and I wasn't feeling their bond. Then her absentee mother appears out of the blue wanting to start a business with her daughters, umm why? For one, she ditched them when they were young and never looked back. Now she just reappears wanting to act like their mother...NO! Kris loathes her and her mother knows this, so she manipulates her youngest Torra who is only 16 years old. Lizet, (the mother) has three strikes against her right out the gate in Chapter 1 with me. Despite my feelings about the mothers actions, the entire beginning just seemed out of left field for me.

As Kris gets into her investigation, we are reminded of her creation Raphael, aka Rafe. Being a necromancer, Kris had risen him from the dead and made him a vampire...with wings! And now as they venture into this case, we learn just how deep their connection runs. Her boyfriend Rush, whom is also part of the Council, becomes jealous and pushes Kris into really thinking about where their relationship is going and how she feels for him, all while facing danger at every corner trying to find a killer. The story was dark and ugly, but I really enjoyed it! The torture, rape and murders are very present and taken seriously by all parties involved, (so if you are sensitive to these acts then this book is not for you). By the end of the story I was wowed with where the story had gone. Due to the disconnected feelings I experienced in the beginning, that brought my rating to 3 Fangs. I would have loved to give it more, but that did keep it from going any higher. However, this is a great read with the way the author built the world, and set the stage for this story to seriously be an ongoing series. I do recommend this upcoming series to all whom love dark paranormal romance stories!

ADD TO YOUR GOODREADS SHELF:  https://www.goodreads.com/book/show/26116111-devil-s-playground