Book Review On The Semi-Perfect Life 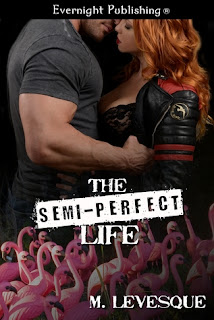 Summer thinks her life is perfect until the night after her promotion when realizes how imperfect it all is without someone to share it with. In an act of desperation she decides to have a one-night stand—in an effort to avoid silly things like long-term commitments and marriage...

Summer Berry was on her way to having it all, a semi-perfect apartment, car, and climbing her way up the ladder to her dream job until she met Jason Keen. Determined to not follow in her mothers footsteps with numerous divorces, she sought out a one night stand with a bad boy who could scratch an itch none of the business tycoons could. The morning after was when the trouble began when she was about to take her walk of shame. Will Summer ever be the same after her night of a passionate and amazing romp in the hay with Jason?

This fun short story of Summer finding her true self was hilarious! I have not laughed so much during a romantic comedy in a very long time. Summer was a driven woman, knowing exactly what she wanted out of life until she met Jason. Being able to erase Jason from her memory was not so easy once they had witnessed a murder on his front stoop as she was exiting his warehouse apartment one fine morning after the most amazing sex she had ever had. Thrown into the witness protection program with him was the worst thing that had ever happen to her, or so she thought. When they arrive in suburbia as a newlywed couple, this is when the story really takes off with its demented humor that was just up my alley! The gated community that the Marshall's placed them in was one right out of the movie, The Burbs with Tom Hanks. That is exactly what the humor reminded me of, and I loved every moment of it! Although the story does have a serious undertone to it, the way the author lays it out turned it into a light hearted and funny romance. I do have to say that the character Caroline, their neighbor and HOA member was the cherry on top for me. Summer engages in psychological warfare with the noisy and obnoxious neighbor that had me laughing so hard I was in tears.

If you love romance, with a ton of warped and genius humor, you will love The Semi-Perfect Life! No oe is safe from the Home Owners Association! LOL!

ADD TO YOUR GOODREADS SHELF:  https://www.goodreads.com/book/show/23432158-the-semi-perfect-life