SALE BLITZ: MORE THAN A FLING

SALE BLITZ FOR MORE THAN A FLING BY AMBER NATION! 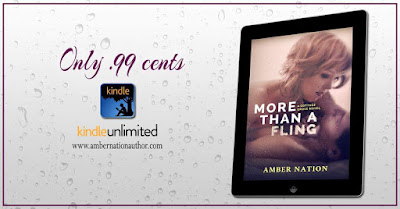 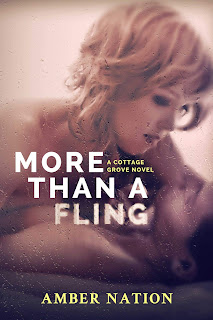 Julia Caldwell has long since mastered the art of seduction in order to catch the only thing on her radar; one night stands. Having two failed marriages under her belt, she’s learned to keep her feelings in check and remain aloof, not wanting to get caught up in another pesky relationship only for it to end eventually in heartache. As the manager of a prestigious Hair Salon in Nashville, she succeeds in keeping the opposite sex at arms-length except when it suits her and her needs. That is until she lands on Cottage Grove soil.

Dean Parker has just as many failed marriages against him, and with being a divorce lawyer it eventually has him thinking that’s why his conquests always fall through, due to his occupation. After seeing his two childhood friends rekindle their flame and earning the happily ever after he so desperately craves, he decides to give up. That it’s not worth the heartache he’s been put through. Until he meets the snarky spitfire who gets under his skin.

Throwing the two of them together in the same town for the wedding of their best friends, Julia isn’t against having another fling, even if it is with Dean, but he definitely has other plans of making it more than that. Amongst their non-defined affair, lurking somewhere in the darkness is a shadow from one of their pasts who will stop at nothing to make sure that happily ever afters stay where they belong, in the fairy tales.