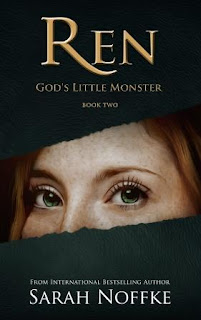 Ren Lewis has the life he’s always wanted: the perfect woman and the perfect job as an agent for the Lucidites, fixing problems before they happen. And yet, he’s still miserable. He blames the monster buried inside of him for his problems. But what this redheaded Brit doesn’t realize is his life is about to be intensely transformed. Problems that he never could have fathomed begin to surface one at a time until his life quickly spirals out of control. Ren, who has never considered himself quite human, is about to learn just how flawed and vulnerable he really is. There just might be problems he doesn’t have answers for, villains he can’t defeat alone, and a heart in his chest that is actually capable of breaking. Readers witness a new side to this man, a side that will make him, if for only an instant, appear human. This powerful genius will meet his match. And she has the ability to do something special. She can break Ren Lewis.

Ren Lewis, one of the most powerful Lucidites in the world, is about to fall hard....

When we last left Ren, he had just reunited with the love of his life, Dahlia, after 20 years. As Ren and Dahlia settle back into each others lives, Ren receives bad news from the head of the Lucidites Institute and friend Trey. While Ren is trying to process this news and worm his way into a level 5 case that is eluding the agents, BAM! Is it true? And if it is, what will Ren do?

Holy sheep skin! This has to be one of the funniest, and most entertaining books from Noffke to date! Ren has been through a lot in his life, most of it horrible and sad, so when parenthood befalls him, it's pretty hilarious. Ren is approached out of the blue by a young girl that looks oddly familiar to him. Well it's because she is his long lost daughter, the one he never knew existed. Despite the fact that Ren hates everyone, except his father and Dahlia, I wasn't quite sure how he was going to proceed with his young offspring, but I was delightfully surprised on how he did.

While Ren is playing catch up and begins to train his daughter on how to control her powers, Dahlia shows her true colors. We all know what a Diva she is, being a famous Pop Star and all, but really, jealous of a mans own child...petty. The whole story is very endearing, and gives me a deeper look into Ren's heart, and how all he really wants is to not be alone in this world. He loves Dahlia to no end, and cares deeply for his father, but with a child, he's not sure what to do. The girl is bright, just like Ren, and quick witted with the retorts at Ren. I love how they both interact with one another. They are two peas in a pod for sure! I am extremely interested in their future. How the family dynamic will turn out and such. For now, the immediate future is still uncertain. Plus this new threat against Ren and another very powerful Lucidite that has been a very bad monkey! Stay tuned for more action, drama, and certainly comedy!

Narrator Review
Tim Campbell returns! Tim is such an awesome narrator, and fits Ren's character to a “T”. The addition of the new character was no challenge for Tim! Great job with the voices, the acting and above all else, the amazing story telling ability you possess. ~5 Fangs.