By +Sarah Noffke  and Narrated by +Tim Campbell 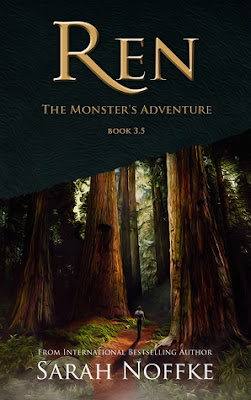 Ren Lewis has seen it all, or so he likes to think. He’s encountered every danger known to man. Due to his powers as a Dream Traveler and unstoppable work ethic, he’s experienced more than any human alive. But Ren is about to have a brand new experience.
He’s being dragged on a family vacation.

I began this novella super excited to hear all about my favorite little family, when slowly but surely things went from good to ugly over just a few short chapters. As I dove deeper and deeper into the story I knew, this isn't right! I don't listen to books like this! This isn't happening, this isn't happening! WHY I screamed!

Dahlia, the superstar pop diva has dragged Ren and his daughter Adalaide with her baby Lucian on their first family vacation. Great! This should be a belly full of laughs I say to myself. Not entirely wrong, but the story does take a very serious note in the middle until the end. In the beginning of the vacation, they run out of gas and end up at a lonely gas station in the middle of nowhere. While Ren is trying to figure out how to get the attendant to pump the gas for him, without him indulging the fact that he doesn't know how, he is approached by an odd old woman. She warns him that he will encounter three wise women along his travels. These women give Ren cryptic messages about life, his past, present, and future. And with Ren's super paranoid personality to boot, the encounters with him and these women is fucking hilarious!

I love this odd little family Noffke has created. They are the total opposite of my family, and what I secretly always wished for in parents as a child. Because of my love for this series, the turn this book takes really fucked with me. I guess cause I forgot about the differences between Dahlia and Ren, and was so wrapped up in the latest arrival, Adalaide's baby distracting me from who these books are really about, Ren.

Tim Campbell reprises his role once more for us as Ren Lewis. Ah Tim, how do I love thee, let me count the ways...1) Brilliant accent! 2) Comedic timing. 3) Zero filter, and telling people what you really think! 4) Vocabulary, and proper usage just at the right time, (see comedic timing!). 5) The fact that I can not tell the difference between you and Ren! Acting skills, like a boss! I could go on, but then I wouldn't have anything new and cool to say about you in the next review ;)