Book Review On Saint Dragoness, (A Sin of Saints Vol.1) by Rain Murphy 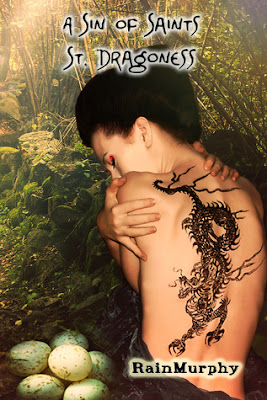 Saint Dragoness was born to a poor peasant family. She was never a true Saint, she was too self-serving. She was intelligent beyond the year she was born 227 AD, and her experiments were scary to her family and the village people.

Scout couldn’t have been more wrong about her average life. She soon learned that she was to be a Dragon Keeper, and all that that meant. Scout was born to be special, she just didn’t know it yet.

This is the story of how the dragons on Decision Island were created, and their maker. Their creation and almost demise of both dragon and maker were brought about by fear and love. Love prevails, but the fear twisted and morphed the creatures into a more peaceful version of their original selves.

At a very young age Eerie knew she was different. With the magic she possessed naturally, she can produce growth from seeds, and later on as she was older....life. Her parents were scared, and discouraged her strange behavior, telling her what she could do wasn't normal and the town folk wouldn't approve. So she hid her talent until one day she was discovered. Instead of protecting their child, her parents sold her to a brothel. When Eerie finally discovered she was able to push her abilities and create life, the dragons came to fruition...Present day the dragons have lived on without their maker for centuries. Taken in by Goddess Jennica and brought to Decision Island, where they lived a more peaceful life, but with one catch. Their is always a BUT.

The entire story was a very sad tale from beginning to end. The horrible acts that Eerie and Scout had to endure were cruel. The dragons were born into this particular kind of life style, and therefore knew no better, but that still doesn't make it OK. The bigotry and fear of the unknown is what caused this entire mess, and if people would only stop for one second to try and understand, or even just empathize than the witch hunt would have never happen. One would think that after centuries of repeating the same mistakes that we would learn. I LOVED this book! It was pretty short, but packed a punch! The story and her characters were very thought provoking, and even mesmerizing. The timing of this book couldn't have been more right.