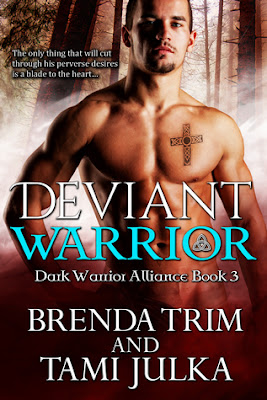 Of all the Dark Warriors, Kyran Tarakesh is the most aberrant. Having witnessed the brutal murder and rape of his mother seven centuries ago, his sexual preferences are twisted and perverse. He walks the razors edge of control and he likes it that way, until he loses that balance and accidentally kills one of his lovers. As second in line to the Vampire throne, he is precariously close to losing his position, not to mention the respect of his brother and fellow warriors. Just when he thinks it can’t get any worse, the Goddess proves him wrong. With her wicked sense of humor, the Goddess catapults him to the dragon realm of Khoth with Mackendra Callaghan, the very human he has been lusting about for months since meeting her. Mackendra not only plunges a knife deep into his heart, she flees and fights him at every turn, inflaming his desires. The surprises keep coming when he discovers she is his Fated Mate. Every belief he has ever had about intimacy is called into question when his mate gives him a taste of true pleasure for the first time. The passion that burns between them is hot enough to burn them to cinders, but he still must dispel her prejudices about vampires and break through her barriers or lose the other half of his soul forever.


Just when I thought the Dark Warrior Alliance series couldn’t get any better, Trim and Julka hit it out of the park with Deviant Warrior, book 3. I was captivated from page 1.  Kyran has some less than conventional tastes to say the least, but, he is hot, hot, hot.  Kyran is so hot that you may just change your mind about a few things along the way.
That being said, Kyran loves Mackendra and the more she resists him the stronger the feelings he has for her becomes. Mackendra being a leader of vigilante group that kills what they believe are vampires, is having a hard time trusting Kyran and the feelings she is developing for him. Both of them have pasts riddled with violence and trauma, each needing to overcome their “demons” and move on.
Mackendra also has a lot on her mind trying to figure out how she is going to save a bunch of females that have been kidnapped and are being held in the bowels of the city. One of the females Shae, is being treated especially vile.  The demons have a plan for her to help lose Lucifer from hell.
Kyran saves Mac for a burning house they are teleported to another world…full of dragons!!! They not only have to deal with dragons but are attacked by red caps, little vicious fairies that are out for blood.  This leads to another mystery that gets opened up.  Getting help from an unexpected friend/foe proves to be dangerous.
Angus, the majordomo, comes clean with the warriors about what he’s been hiding all these long years, his troubled past and his connection to a royal throne.  As the warriors try to digest this news, they are also trying to figure out how to get Kyran and Mackendra back. What will happen next??
Trim and Julka are quickly becoming the next Lara Adrian and JR Ward. I can say enough good things about this series.  I am waiting with bated breath to read book 4.  I love the characters and the stories within stories.  There is a lot more to this series than meets the eye. I have quickly become a fan and am so happy I have been introduced to these wonderful authors.  I was given this book for my honest review and there you have it.  Happy reading!!