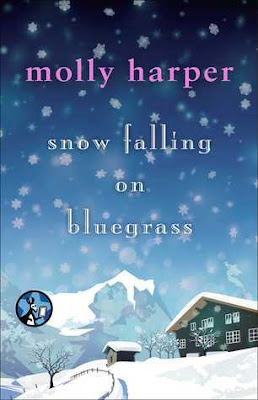 Kentucky Tourism Commission employee and executive assistant extraordinaire Kelsey is known around the office for having everything under control. So it’s not surprising that she and her boss, Sadie, have everything planned to the second for the office winter retreat. But there are things even Kelsey can’t micromanage.

An unprecedented snowstorm smothers half of Kentucky and knocks out the power, closes the roads, and generally shuts down the state. Luckily, the lodge has working fireplaces and enough food to keep the staff from turning on each other like something out of The Shining. Kelsey wouldn’t mind being stuck inside if it wasn’t for the tension with her not-so-secret crush, Charlie, the office’s statistician. But handsome Ranger Luke, the lodge’s only employee on hand, is there to take Kelsey’s mind off her discomfort.

Even though this weekend is supposed to be a planning session for KTC, Kelsey can’t help her mind from wandering and finds herself conflicted over Luke and Charlie. Someone’s love will keep her warm, but whose will it be?

The third book in the Bluegrass series focuses on Kelsey, the executive assistant to Sadie, at the Kentucky Tourism Commission. Sadie has organized an office winter retreat that will leave you laughing, crying, and wishing you worked with this group of highly dysfunctional adults!

Kelsey has been living with her boyfriend Darrel for years, and no one seems to be able to see what she see's in this loser. What Darrel does all day is not work, play video games, and charge unnecessary yet expensive items to Kelsey's credit cards. On top of that lovely big picture I just drew, he keeps Kelsey in this constant state of insecurity and self loathing to keep her from leaving him. Prince Charming he is not. At the office, there is Charley, he is the statistics guy and Kelsey has been head over heels for him for years now. He is pretty nerdy, but in a sexy way that makes her want to have crazy monkey sex with him! Their back and forth non-flirting has caused some serious sexual tension, and has the entire office praying Darrel falls into a black hole so those two crazy kids can hook up once and for all. Will the weekend retreat provide cupid enough time, or will he be shot down and killed by the abominable snowman?

I was hoping this book would be about Kelsey, because man, Darrel is the biggest piece of shit and I was just waiting for his day of reckoning to come! So said piece of shit actually broke up with Kelsey for some neighbor slut just weeks before the retreat, but Kelsey kept it quiet. Well, I would too! So when she gathers with her co-workers for this damn retreat it couldn't have come at a better time for her. During the trip she planned on regrouping and finally starting to move on, but others had different ideas. The first and foremost offender is her own mother, who keeps screaming at her she needs a man, any man to save face. Gina the office bitch who is constantly throwing herself on everyone and spreading false rumors. Luke the Park Ranger/Resort caretaker putting the moves on her while she is trying to get close to Charley. And last but not least Charley, for pushing her away and acting like he doesn't even want to be her friend. With the help of Bonnie and Will's secret rendezvous, and Josh's constant interruptions it's no wonder anyone could get together in the enormous resort that had three floors with just a dozen or so people in it.

I loved the snowpocalypse scenario the group was forced into. It created the perfect storm with all the moments and characters. Throwing a surprise on Darrel orchestrated by her neighbors that she so lovingly referred to as “The Lost Boys” was brilliant! I can't stop laughing at the ending, and wishing I had my own Lost Boys. Molly Harper has outdone herself again, thanks!

Amanda Ronconi continues to be an excellent voice in the Bluegrass series! Thank you Amanda for the laughs.