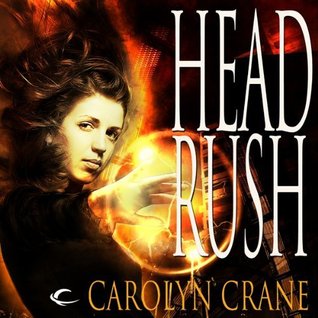 In an attempt to put her unhappy past behind her, Justine Jones throws herself into nursing school and planning her wedding to Otto Sanchez, the man of her dreams. But something is off. Random details aren’t adding up…and is it her imagination, or are her friends and fiancé keeping secrets from her? And what’s with this strange sense of unease, and her odd new headaches?

Justine tries to stay upbeat as Midcity cowers under martial law, sleepwalking cannibals, and a mysterious rash of paranormal copycat violence, but her search for answers leads her into the most dangerous mind game yet.

With the help of unlikely allies, including her paranoid dad and best frenemy Simon, Justine fights her ultimate foe…and unravels the most startling mystery of all.

Head Rush is the last installment of the Disillusionist Trilogy. Justine is in the midst of preparing for her wedding to Otto Sanchez, the Mayor and most well connected high cap in MidCity. Packard is on the run from Otto, and her friends Shelby, Simon and Esz are acting mighty peculiar lately. Will Justine figure out what all the eye gestures and innuendos mean before she ties the knot?! Dun, dun, dun!

Last thing Justine remembers is that she witnessed Packard killing Avery, the man behind the brilliant invention of the high cap glasses, and Shelby's boyfriend. Shortly after, Otto proposes to Justine and also arranges for her to get accepted into nursing school. All is well in her world until she sees Packard. She doesn't know why she doesn't hate Packard the way she should for killing Avery. She has this nagging feeling of devotion to his friendship still. Packard pleads with Justine over his innocence, and tries to stop her from marrying Otto. As for Shelby, she vows to disembowel her lovers killer, but never refers to Packard as such, and that crazy Simon positions himself right smack in the middle of her wedding by winning a spot as one of her brides maids! I can't help but to think to myself that they are up to something, and it has to do with Otto.

The intensity of knowing the truth about what happens in the previous book, and waiting, watching as Justine slowly figures it out is painful! But she's smart, and she feels something is off between her and Otto. I love how Justine has made friends with Shelby, Simon, and the rest of the gang. I never saw them as becoming a family because they all were so separate from each other, but to see the bond between them now is heart warming. Knowing that this was the final book in the trilogy I had anticipated a big bang in the end and I was not disappointed. I loved that we got introduced to Justine's father finally. When Justine arrives at her fathers house to pick him up for the wedding, their exchange brought me to tears. If you think Justine is weird with her vein star paranoia, wait til you meet her father, he's a hoot! I loved this entire journey with Justine and I would highly recommend this trilogy, especially the audio version!

Rebecca Wisocky, so I Googled her and guess what!  http://www.imdb.com/name/nm0936607/
She is that actress that I thought she sounded like! Please visit her profile in the link I have provided if you don't recognize her name. I love Rebecca and how she portrays Justine. She is truly amazing, and I would listen to anything she narrates from here on out!