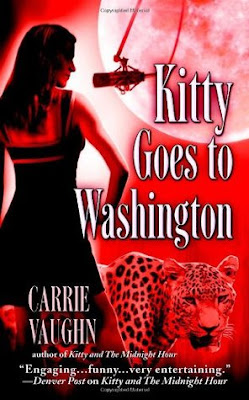 Celebrity werewolf and late-night radio host Kitty Norville prefers to be heard and not seen. So when she's invited to testify at a Senate hearing on behalf of supernaturals, and her face gets plastered on national TV, she inherits a new set of friends, and enemies, including the vampire mistress of the city; an über-hot Brazilian were-jaguar; and a Bible-thumping senator who wants to expose Kitty as a monster. Kitty quickly learns that in this city of dirty politicians and backstabbing pundits, everyone's itching for a fight.

Kitty Norville is a lone wolf, traveling from town to town to host her radio show, The Midnight Hour. Ever since she left her pack and lost her best friend TJ, she feels alone and a little afraid. Not being sure what will become of her future, Kitty continues to play advocate for the lost and helpless vampires and lycanthrops alike through her talk show. When a Senate Commity is brought forth by a “scientist” who is searching for continuation of his funding for curing vampirism and lycanthrops, Kitty is called in to testify as an expert. Expert in what, being a wolf? So off Kitty goes to Washington...

Kitty really stirred some shit in book one, Kitty And The Midnight Hour, which is what almost got her killed and introduced to the incredibly hot Cormac Bennett. She outed the supernatural community! The majority of the public still believe it's a hoax for the talk show, but the government and conspiracy theory folk don't think so. Kitty has no idea how far this scientist Dr. Paul Flemming has gone with his research, but she is about to find out, and not be a happy person. When she arrives in Washington, she is met by her attorney friend Ben O'Farrell. When Cormac appears the next day as security for the proceedings, all is complete in Kitty's world. She has back up if needed (although a little questionable at times) and her honest and brave Lawyer Ben. Let the games begin!

As soon as I heard this son of a bitch Flemming talk about “his research” I knew I wasn't going to like him. Flemming was, or is, obsessed with the sups abilities and wants desperately to figure out how he can harness it to use in live human subjects. He doesn't give a shit about curing them, that was just a cover I think from the very beginning. My paranoid brain went into conspiracy theory mode right from the get go, and poor Kitty wasn't jaded enough yet to see it coming. Good thing for her she was likable and had people close by that cared for her. I loved the were-jaguar Luis, and the fact that he hooked up with Kitty. She needs an honest, strong man in her life, and oh God a Brazilian lover to boot **fanning myself**. Washington isn't like any other city that Kitty is used to, the were's are not part of packs, and the vampires all bow to one Mistress Alette. According to Alette, the were's are a dangerous and unpredictable bunch, and she warns Kitty to stay away from them. But like everything else, this too is not true. As Kitty digs deeper in the Flemming and the local were's, she uncovers the truth, something they have all been hiding from each other and themselves. Kitty Norville is one kick ass character! She is smart, well educated, successful, and knows what she wants. She knows when to lower her head and keep quiet, and she knows when to strike while the iron is hot! Kitty is no one's bitch and I've got the feeling she's just getting started.

Marguerite Gavin narrates for Vaughn in this fantastic paranormal series. I have had the pleasure of hearing Marguerite before and I absolutely love her! She has such a golden liquid voice and it works perfect for a were talk radio host! I am so glad that Gavin is on board with Kitty's series because I am really digging the new series and now I can relax knowing such a great narrator is on the job!