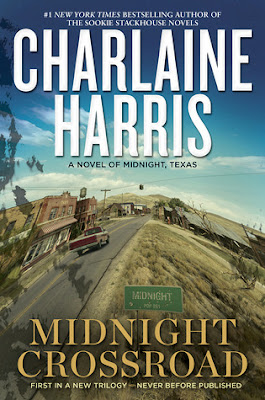 Welcome to Midnight, Texas, a town with many boarded-up windows and few full-time inhabitants, located at the crossing of Witch Light Road and Davy Road. It’s a pretty standard dried-up western town.

There’s a pawnshop (someone lives in the basement and is seen only at night). There’s a diner (people who are just passing through tend not to linger). And there’s new resident Manfred Bernardo, who thinks he’s found the perfect place to work in private (and who has secrets of his own).

Stop at the one traffic light in town, and everything looks normal. Stay awhile, and learn the truth...

Midnight Crossroad is not so much about a person as it is about the town Midnight, TX. In Midnight you never know what will happen at the corner Gas-N-Go...

Manfred Bernado, a psychic that stepped straight out of the Harper Connelly series, has just moved into Midnight. After burying his infamous psychic grandmother Zilda, he is looking to settle down on his own for the very first time. Manfred is renting a place from Bobo Winthrop, who's wife just recently went missing, and he also owns the pawn shop. As Manfred gets to know the towns folk, he is rapidly sucked into a murder mystery. Wondering whether he made the right choice of places to move, Manfred gears up for the incredibly scary unknown that will unravel right in his own front yard.

For this being the beginning of a new series, I have to say wow! The world building had already been established by the author by including the worlds from her previous books, how genius is that! Secondly, Manfred is right out of a series we are already familiar with, so it was nice to see him again. Now lets meet and get to know the rest of the cast. Each character placed in Midnight was strategic and brilliant. They all played a role that enhanced the story in a way that I never thought possible. Bobo Winthrop has a messed up past that keeps coming back to bite him in the ass, and along with his wife gone missing, well hell, it's no wonder the man hasn't off'd himself. His cute but quirky neighbor and good friend Fiji is a witch with a major crush on Bobo. Together with a little help from his friends, Bobo, Fiji and Manfred take charge in working the case of one missing Aubrey Hamilton. What they uncover is a huge messed up story all revolving around Aubrey, her lies, a group of white supremacists, and a talking cat. What will they discover next!

I loved this story, and the characters in it. The twist at the end shocked the hell out of me, and damn if I didn't love Mr. Snuggly by the end of the book. I can honestly say that I look forward to reading the next book, and would highly recommend Midnight Crossroad to any and all paranormal, mystery lovers.

Susan Bennett narrates Midnight Crossroad. She is a new to me narrator, yes new. to. me. Can you believe it! OK, so Susan did a great job with her narration. The different character voices she switched to, and the accents were great! The sound quality was perfect as well. I really enjoyed listening to Susan so she has earned 4 Fangs from me.