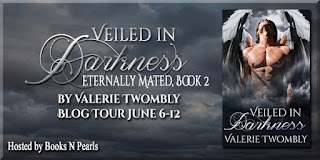 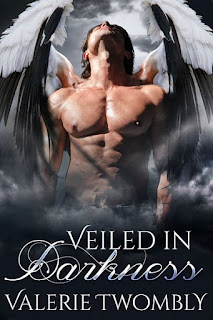 Veiled in Darkness
Eternally Mated, #2
by Valerie Twombly
Paranormal Romance
Self published
May 30, 2016

When Eli spots Ashley across a bloody battlefield, he can only steal a moment alone with her. Powerless is an emotion new to the hunter, but it’s one he faces daily when he realizes killing the demon king in order to free his mate is out of the question.

‘Death’ was not a nickname Ashley wished to carry. Being the only one able to stop Lucifer’s evil plan was an even worse fate. When she discovers her true ancestry, fear that she will succumb to her darker side forces her to dig deep for the strength she needs to fight.

The clock is ticking and soon Ashley will face the ultimate test. 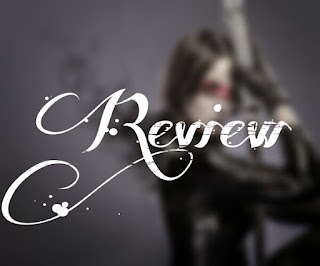 Veiled In Darkness is part two of the epic love story and battle between good vs. evil! Ashley is the Angel of Death and she is mated to Eli, an Angel and hunter. Ashley has restored Eli's soul to him via Lucifer in exchange for herself. Lucifer wants Ashley's abilities badly, and with her by his side, he can grow his army and pursue his desire for world domination, mwahahahaha!

Ashley had only just begun to learn who and what she was when she was taken by Lucifer. She had already bonded with Eli, and that connection along with the distance was killing the both of them not being able to be together. Lucifer tries to break Ashley and make her a compliant servant, but it doesn't end up working out for him so much. Ashley slowly begins to learn her true nature, and that she has powers beyond her wildest dreams. When Ashley divines a plan to get out of her contract with Lucifer, she pools her resources with the most unusual characters. Once Eli and his band of Angels get involved, they discover what Lucifer is really up to, and that changes the entire game plan. And let the battle begin!


The characters are pretty damn well written! I loved how Ashley's character grew into her new identity! She was a far cry from her “Justice” role in the first book, Fall Into Darkness! Building her family tree, and giving her the knowledge of her parents relationship was well played by the author. If it weren't for that, I don't believe Tegan's character would have survived the story. Also, adding new loyal followers to be part of Ashley's inner circle was a great idea considering how this book plays out. The two new personalities add that certain “something” that brings the present and future together smoothly. The sexy times with Ashley and Eli are panty melting, and a very much needed connection to show how deeply they desire one another. The epilogue leaves me with much sadness. I would have been better off without that nugget of information just yet. With that, it leaves me with anxious anticipation for the next book to see how things play out.
*Book provided by the author for an honest review*

Eli scanned the battlefield. Hacked body parts littered the ground and pools of blood coated the landscape. The earth groaned as she absorbed the foul liquid of the fallen demons.

The battle had lasted hours. How many he wasn’t sure, but his muscles ached and blood coated his clothing. Most of it from those he’d slain, but some belonged to him. He was too weak and exhausted to heal himself. Besides, his only thought at that moment was of her. He’d spotted Ashley the last time they’d battled. She was seen collecting the demons’ souls and sending them––he supposed––to Hell. Lucifer would likely have her bring them back to life so this hellish nightmare could start again.

Eli cringed at the thought.

He’d tried to speak with her, but when she’d spotted him, she had vanished. This time… This time she would face him. It had been a month since she’d gone. Seven hundred and thirty hours, a fraction of time to an angel but an eternity to him. He missed her so much his heart actually ached. Every morning he awoke and wondered if she thought of him. Every night he went to his empty bed and prayed she remembered he loved her. Had she made it through the day? Was her mind still intact or had Lucifer broken her? He tried not to think about it because if he did, he was tempted to fall again, and this time he’d make sure he made it all the way to Hell. Luckily, his sanity stayed in check, and he reminded himself of the gift Ashley had given him. The sacrifice she had made to save his soul would never be forgotten. He would remain steadfast in his duties while he searched for a way to save her.

She was here and her back was to him. Her hair, pulled into a single braid, draped over one shoulder.

His fingers itched to unravel the golden strands and set them free.

Black wings, speckled with gold dust, were spread as she pointed to each demon and watched their body parts vanish. Eli wrapped his own wings around his body and cloaked himself. Now that he knew she would flee, necessity dictated he hide his presence. She was far too young and inexperienced to escape him now.

He watched…waited in silence as she made her way around the field. For some reason the others ignored her, and then it dawned on him. They couldn’t see her. A smile lifted his lips and pride swelled inside him.

So, my little angel has learned how to cloak herself as well.

She was close. He waited for her to finally tend to the demon body he stood over. He reached out and grabbed her. She gasped, her power flaring.

He revealed himself. “You can’t run from me this time.”

Her face lit with relief then panic. “Eli, you need to let me go.” Anger flashed in her green eyes. “You know I could have killed you!”

“You can’t kill your own mate, so stop running from me.” He pulled her closer and erected a barrier around them to keep others from viewing their private moment. “I’ve missed you. Are you okay?” He moved his gaze from her eyes to her full pink lips then dipped to her breasts. She wore some black leather thing that revealed more cleavage than he cared for her to share. Matching pants clung to her curves, and boots completed the ensemble. Damn she was hot, and his cock throbbed with need.

“I’m as well as can be expected. Now release me, I have work to do.”

“We aren’t supposed to be together. Lucifer will punish you if he finds out,” she whispered and glanced around, likely looking for the devil himself.

“Listen to me.” He tightened his grip, fearful she’d somehow get away before he had a chance to speak. “I don’t care what that bastard does to me. Do you understand?”

“I. Don’t. Fucking. Care.” He gave her a slight shake to bring her back to him. “He can do to me whatever he desires. If he wants to let demons pick the flesh from my bones then pour salt over my wounds, so be it.”

“No. No.” She struggled to free herself. “Please don’t say that. I can’t bear the thought of him hurting you.” She scanned his bloody clothing. “You’re hurt.”

“I’m fine.” He bent his head and claimed her mouth. Demanding and passionate, his desire for her flared white-hot. She continued to struggle, but he pressed his tongue against her lips until finally she softened and gave in. Opened to him until they were both kissing each other as if it were the end of the world. To Eli, it might as well be. Having her back in his arms, pressed against his erection, was all he wanted. He wanted to take her fast and hard, but this wasn’t the time or place. He’d forsake everything to have her back safe. He broke free, both of them panting from pent-up desire.

“I need to know you understand that I will do whatever it takes to be near you. Even if I can only have a stolen moment. If Lucifer wants to punish me, I’ll take it.” He dropped his forehead to hers. “He can’t hurt me any more than he’s already done by taking you from me. I will not let him have you.” She pushed against his chest, and he freed her.

“I have to go,” she whispered.

“I will find a way, Ashley. We belong together, and I will find a way to free you,” he shouted as she faded away. All eyes were on him, but he didn’t care. Let his brethren believe he’d finally gone mad.

Get the first books in the series to start the journey

Free at all retailers


Giveaway: 1 Angel wing necklace (US only for shipping)