To my pleasant surprise, she invited me and a friend to dinner during the convention! I was so excited I didn't know what to do with myself. I invited my wonderful sister-in-law to come along because she too had read this author's book.

The author I am speaking of was the "Featured" author of this event, Connie Suttle, of the Blood Destiny series. Connie and her lovely assistant Joe kept in contact with me through the countdown to the convention, until we met for dinner. Joe brought not only Connie and her husband, but also "goody bags" for me and my sister-in-law.  We had dinner, lovely conversation, laughs, and photo ops. Connie was also kind enough to include her book: Finder, First Ordinance, in the goody bags, which she signed "To my favorite fan".  I was in seventh heaven!

The last day of the conference was book signing day which was open to the public. All of the authors that attended the convention were going to be there. The day of the signing I brought several books I had purchased from the Browse About Book Exchange store located in North Wilkesboro, which is where I reside. 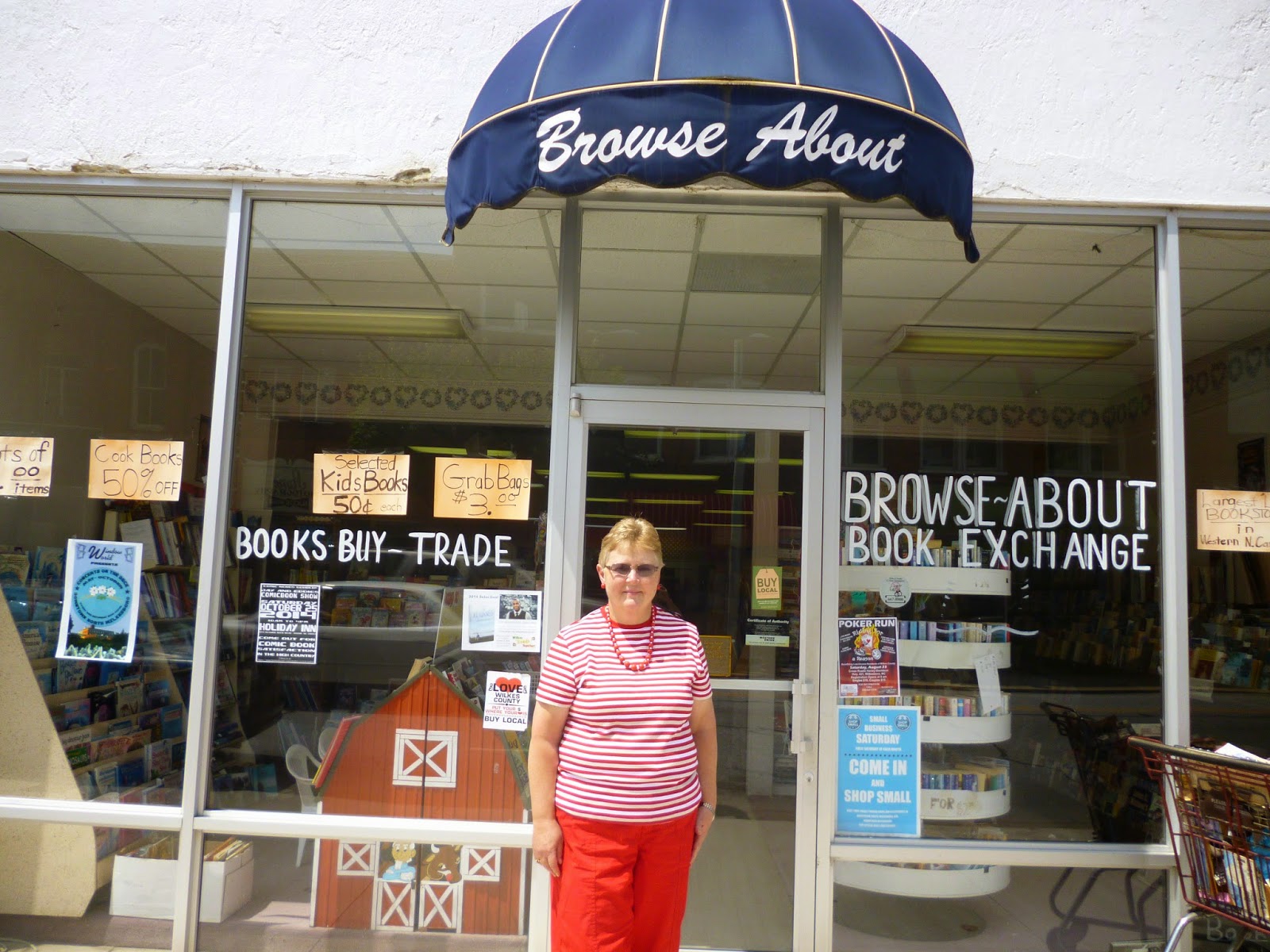 With my mother-in-law in tow this time, we arrived sharply at 2 p.m. We were immediately overwhelmed by the sheer number of authors in the ballroom. Our first stop was Connie Suttle's booth, of course. Connie and Joe both greeted me with hugs. Connie surprised me with a generous gift; signed and personalized copies of Blood Wager and Blood Passage! I was really taken aback by her kindness towards me. She also gifted my mother-in-law with two signed books from her other series. My mother-in-law was very surprised and of course happy to get an unexpected gift. 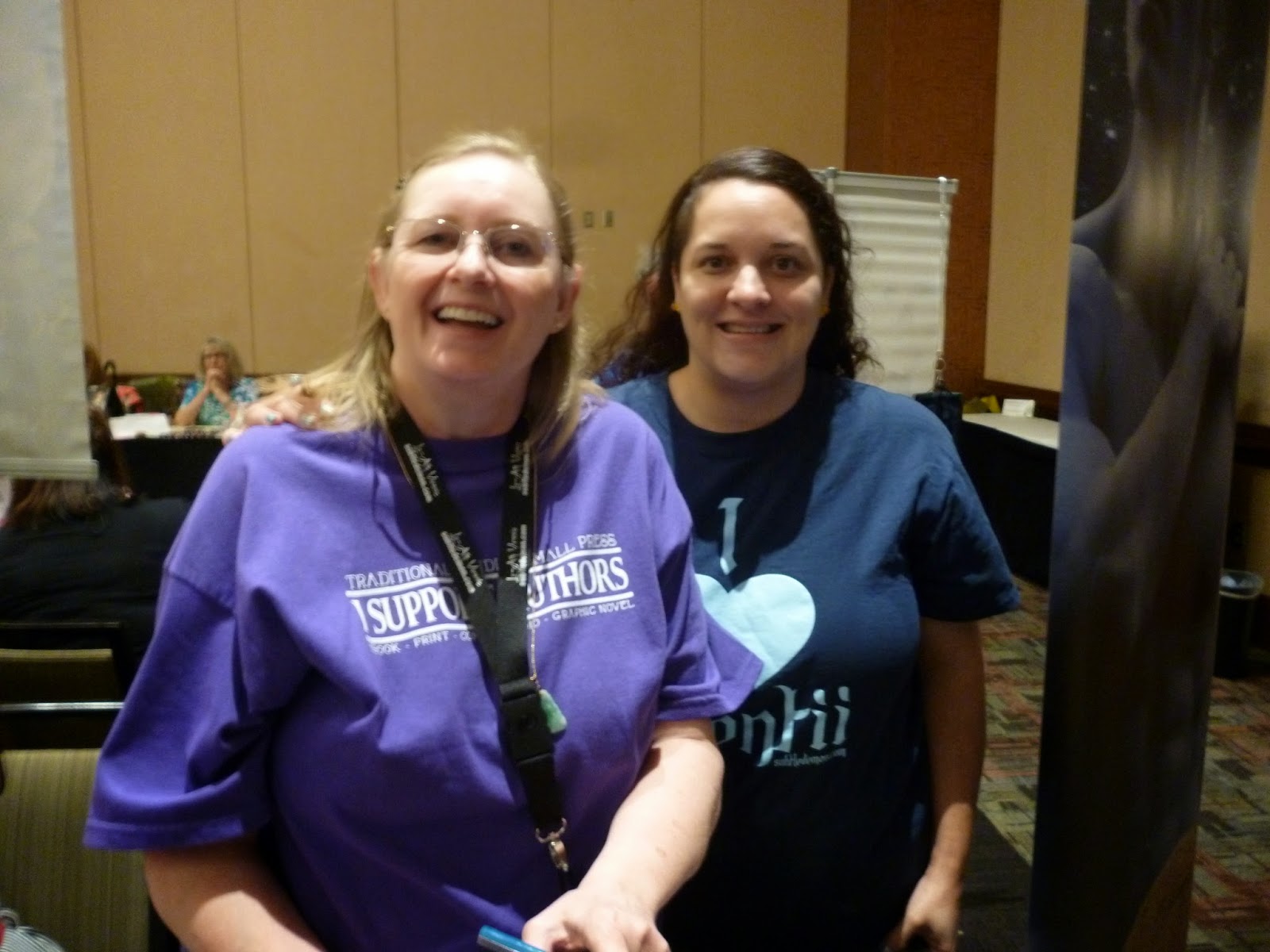 While talking with Joe, I mentioned that I had questions for Connie and hadn't had the opportunity to ask during dinner the other night, and I wondered if could I email them to her. He invited me to stay til the end of the book signing and talk with Connie. Unfortunately I had to decline due to the baggage I had with me. Bummer.

After my visit with Connie, I had a lovely chat with author +Julie Morgan. She was a very nice woman that was more than happy to take a picture with me and autograph a card for me. I had not had the chance to read anything by her yet, but she was very nice despite that fact and gave me her info to look up on the internet. 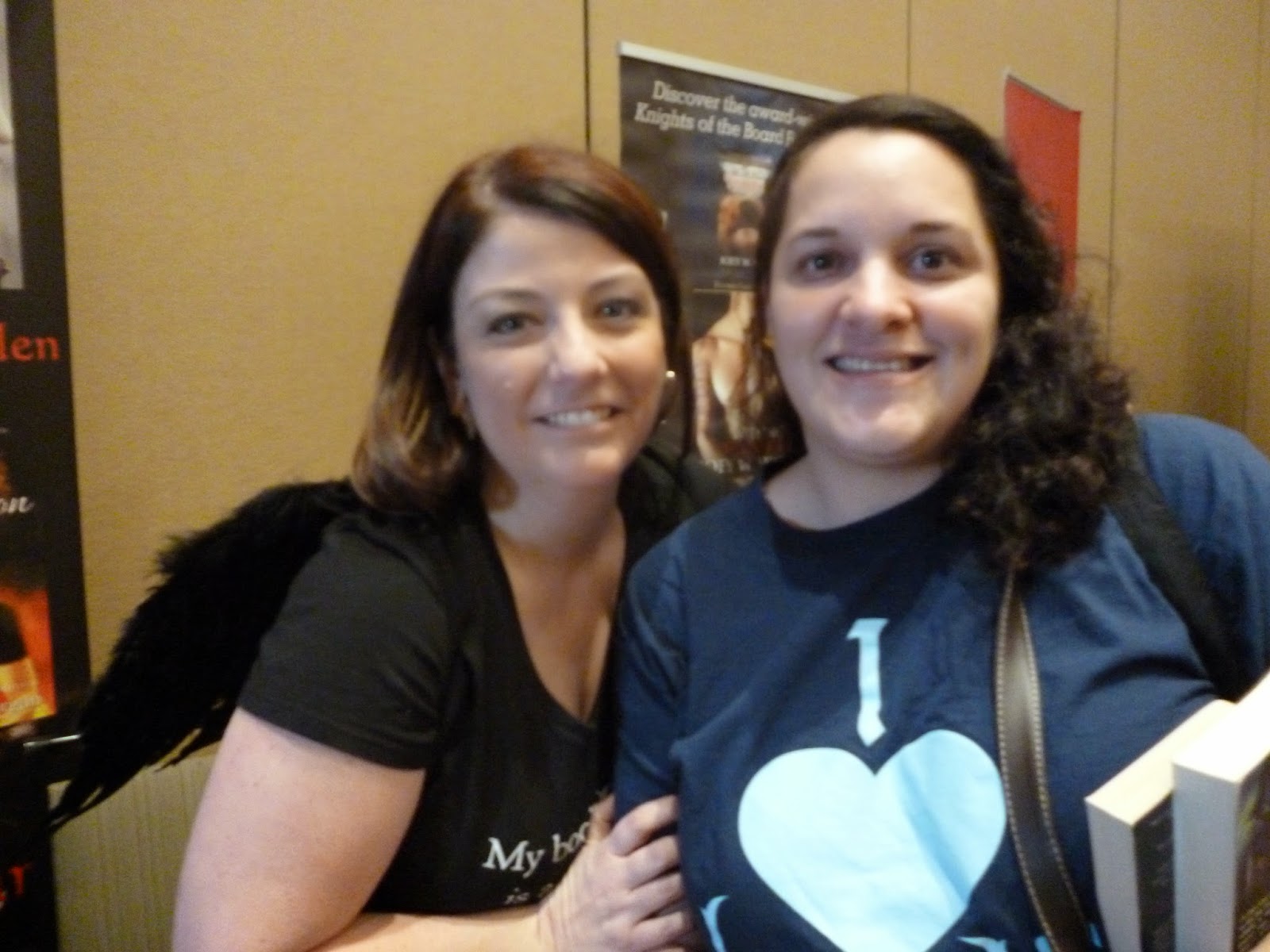 Next was +Jennifer Estep. I had her book Kiss of Frost with me, but had not read it yet and didn't realize it was the second book in the Mythos Academy series. Again, Jennifer was very understanding with me being a new reader of hers and she flooded me with swag, print outs of her book lists, and their reading order, plus a photo together.

Then there was +Alexandra Ivy, btw, she was the Master of Ceremonies for the event. I brought two of her novels for her to sign, plus she schooled me on her series and took a lovely picture with me. Next in line was +Carly Phillips. Carly was decked out with all kinds of swag, more so than the others. I love free stuff! She was just as kind with signing the books and taking a picture with me. 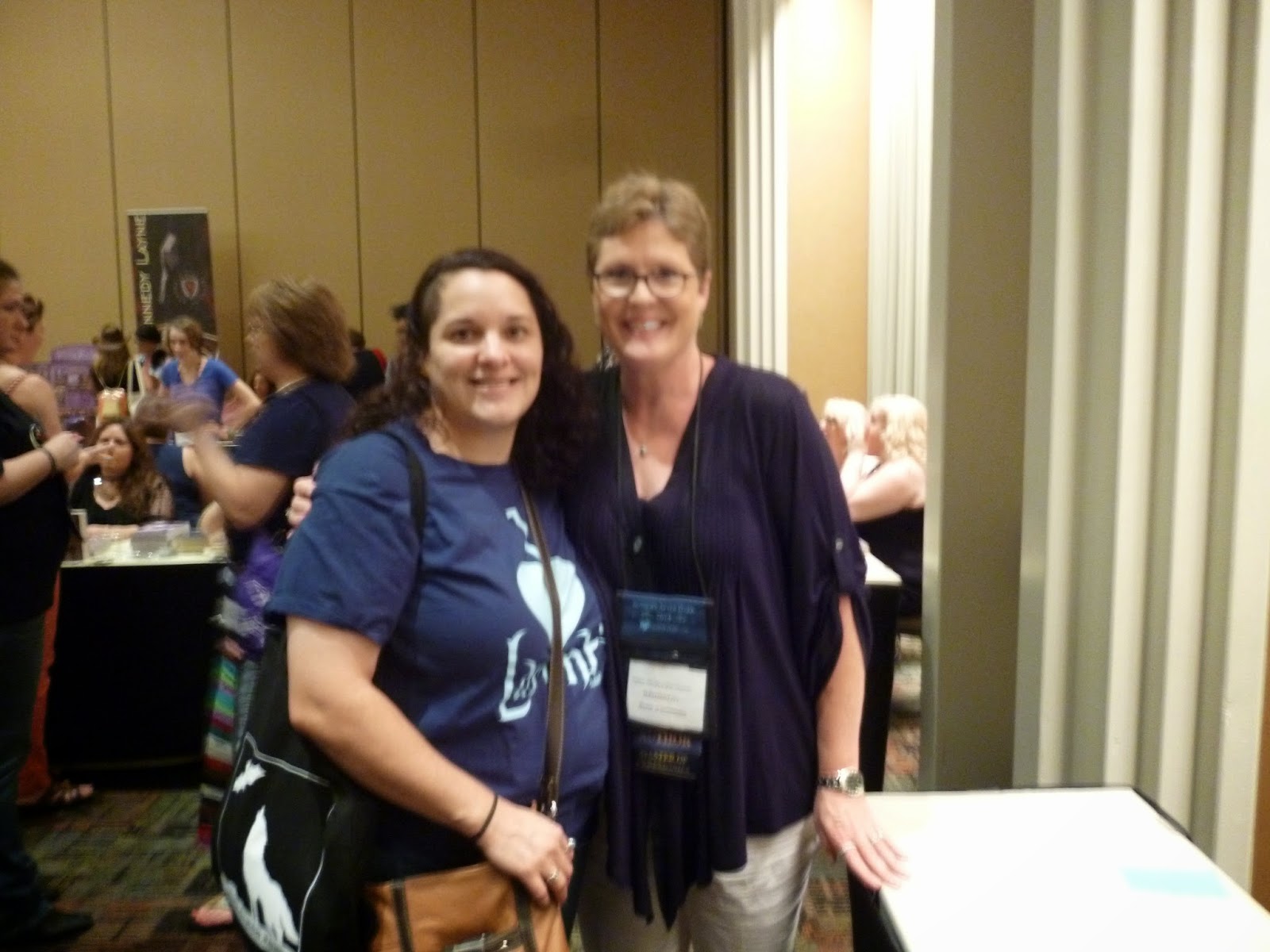 I have to say at this point my head was spinning. There were so many authors, all of whom had swag, books, candy, cardboard standups, it was like Marti Gras I imagine, if I had ever gone, for authors.

Last, but not least, was +Terry Spear. Now Terry was busy signing ten thousand books by this ONE person, so as I patiently waited I had a nice conversation with the author next to her which was +Paloma Beck.

Can you believe it?! I was rubbing elbows with authors! Paloma was in agreement with me on Charlaine Harris' books, the Sookie Stackhouse series. We both LOVED that series and discussed which was our favorite and the fact that she hadn't read the last one cause she was scared to because that meant it was over. I TOTALLY know how you feel Paloma! I have actually cried when finishing a series. You are so invested in the books and have gotten to know and love, or hate in some cases, the characters, it's hard to say goodbye. 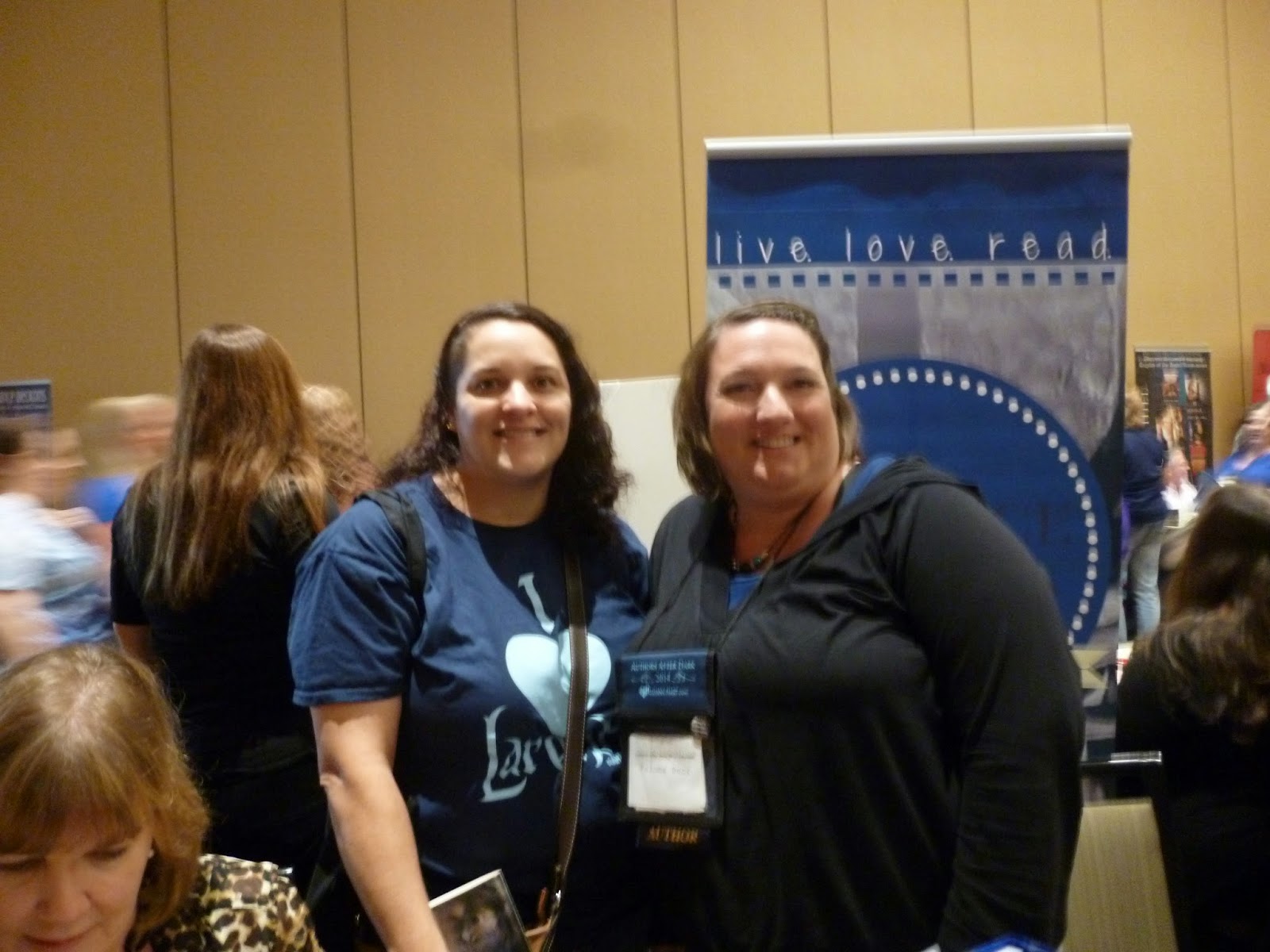 I am absolutely amazed at how nice and down-to-earth all of those women were. They are all taking a huge chance by putting their writing out there to be loved, hated, and scrutinized by everyone! Now that takes some brass cojones! Their act of courage has inspired me to start my blog. I have been wanting to do this for a while now and have been too afraid to. I am in awe of all the women I met on Saturday and I thank you so much for sharing your thoughts and feelings with me on the books we love!