Book review on No Prince Charming, (The Secrets of Stone Book 1) by +Angel Payne and +Victoria Blue 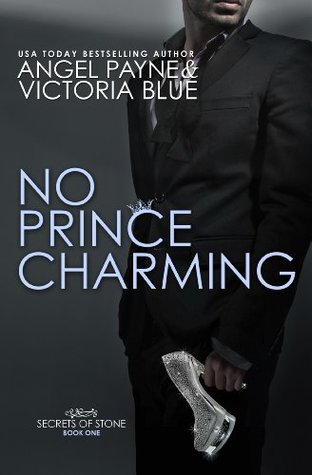 Blurb:
“Once upon a time, there was a girl who dressed up and went to a big party at the palace. When she was there, she met a prince. They danced and fell in love…”

Damn good line. Too bad I don’t believe a word of it anymore.

My name is Claire Montgomery...and I’m not a princess. I’m a fighter. I worked hard to earn my place on the emergency image repair team for one of the biggest public relations companies in the country. We’ve been called to the renowned Chicago headquarters of Stone Global Corporation, where it’s our job to clean up a heap of the Stone family’s filthiest laundry. Our success will be the biggest victory of my career. I’m on my game. I’m ready.

Why doesn’t “ready” include a contingency plan for Killian Stone?

My name is Killian Stone...and they call me the “Enigma of Magnificent Mile." That’s just the way I like it. Elite tycoons want into my bank account. Their wives and daughters want into my pants. They’ll all do anything for a piece of the enigma—until a crack in the castle is too huge for anyone to ignore. What they all don’t know is that I’m thrilled about the fissure. Their fascination with the scandal means nobody will look at the bigger secret of the Stone family. I’m safe.

Until Claire Montgomery walks through my doors.

Her honesty, her bravery, her humor…they pull me in, a prism against the gray walls of my tower. I’m captivated. For the very first time, I long to shed the enigma. To share my secret. But what the hell will that get me? Even if she fits the slipper I offer…I’m no Prince Charming.

Review:  This story is about Claire Montgomery, a 26-year-old career gal, working for Asher and Associates, a PR Firm in San Diego, CA.  Claire works the statistics side of PR, graphs and boring blah blah shit, breaking her ass towards her way up the ladder.  Her boss, Andrea Asher, will soon be married to Clarie's father, Jamison, and is a class A Ice Bitch Queen!  Said Queen, has an evil minion of a daughter by the name of Margaux, aka Princesszilla, aka Margauxzilla, and my favorite Margie, when the office clowns want to piss her off!

Claire is full of ambition and knows she has to work extra hard to prove herself, but she also has a sketchy past that she has done her best to keep locked tight in her chest of secrets.  The thought of her father and future step-mother ever finding out would not only devastate her father but ruin her career that has only just begun.

Asher and Associates have been hired by a very powerful and prestigious family in Chicago to clean up a huge media nightmare mess, which is right up the firms alley!  Andrea rounds up the troops, the evil, conniving, skanky bitch Margaux, Claire, Chad, (the only one with brass cajones), and Michael, (the mellow but elegant charmer), for a fantastic coach seat ride, (except Andrea and Margaux of course), to the windy city.

The Asher firm arrives to meet with the man in charge, Killian Stone of Stone Global.  SG is a massive corporation that has been around for a very long time, and Killian comes from money so old it says expired on it!  On the way to the meeting, Margaux announces to the team that she has "dibs" on Killian Stone and proceeds to give Claire the mother of all threats in just one single glare.  For fuck's sake!  They haven't even met the people yet or discussed the job at hand, no pun intended, and this skanky ho is already getting her coochie in a clinch!  The ordeal they need to get under control is the scandal Trey Stone, Killian's older brother, who is a drunken man whore, created by sleeping with Senator Wooten's 18-year-old daughter!

As everyone is gathered in the conference room in Stone Global, Killian and his brother Trey greet everyone, and when Killian sets his focus on Claire, the sparks are immediate!  Oh shit..  During the presentation, Killian makes a bold move by sitting right by Claire's side instead of Andrea and Margaux.  We all know Margaux is having a shit fit right now!  When the day raps up, Claire is left behind to continue working on her graphs and such.  Claire is ready to go when she realizes her phone charger is plugged in at the middle of the huge conference table that she is forced to climb onto on all fours to reach.  Well guess who walks in on that!  Killian of course, and he has naughty thoughts as we watches Claire's backside wiggle it's way back towards him to get off the table.......and the game begins.

I loved so many things about this book that I will try my best to include all of them, without spoiling the story for you.  First thing, the book is written through Claire and Killian's view.  It switches from one to the other, so you get great insight on what Killian is thinking and going through.  This is especially sexy hot in chapter 5, when Killian fantasizes about Claire, ya baby!!  Another great part is how real the characters come across.  They are believable, I totally felt connected to the people, as if they were my co-workers with the banter and camaraderie they displayed with on another.  Which brings me to my next point, the funny, hilarious shit they say!  I was laughing out loud several times throughout the book, I loved it!  Example, Chad was making fun of Margaux about her "wet spot" for Killian and rubbing it on him.  Then when Killian thwarted Margaux in front of the whole team, Chad- again with his brass cajones, starts calling Margaux "Margie," knowing full well she hates that name, and Michael has to step in to calm her down cause they all know, when you poke that bear, she takes it out on all of them.  And when Claire talks about the private email Killian set up to be able to send her filthy and hilarious emails, the email account name he gave it was  Long Duk Dong!  And one more, when describing how angry Margaux was after a climactic scene, "Margaux was mad and tormented as a junkyard dog with a rent special for the fleas".

Let's review the characters, shall we?  Claire is beating herself up over what happen with her ex-boyfriend, and blames herself for being so stupid and trusting.  She really wants to be able to leave the past in the past but is having a difficult time with trusting and allowing herself to be happy.  Margaux is spoiled to the point she does and says asinine shit, especially at inappropriate times, and the Ice Bitch Queen doesn't say shit to her!  I guess the apple doesn't fall far from the tree.  She gets what she wants, or she raises hell and gets vindictive.  Jamison, Claire's father, is a hot Irish dude with a hint of the accent still and everything, who apparently has his head up his ass for even getting involved with such a spoiled, self-centered person such as Andrea.  Killian, the youngest of three in charge at Stone Global, has his own deep, dark secret.  He is a workaholic that is open to love but doesn't think anyone will stick around once his true self is revealed.  Trey is the #1 fuck up in the family, a disappointment, and not trustworthy.  Lance, the oldest brother,  makes rare appearances in the book and is not much of a family business kind of guy, more of an artist who lives and does his own thing separate from the rest of the family.

You put all these crazy fuckers together, and you come out with one hell of an ending that you will not believe!  This book was such an emotional roller coaster, I didn't know if I was coming or going!  One minute I was so angry with Margaux, I just wanted to punch the skank in the face!  Then I was depressed and wanting to cry along with Claire, curled up in the fetal position.  Next, I was extremely sexually frustrated wanting to join along with Killian on some personal one on one time with myself.  TMI?  Get over yourself!  I'm just explaining how easy it was to get scooped up in this book and empathize.  I enjoyed every happy, sad, miserable, horny, and angry minute of it!  You will not be disappointed in the least with this awesome, wonderful, and funny contemporary romance.

and B&N
Did you find this review helpful, fantastic, or otherwise all around great?  Then please click +1, and follow me!
Posted by Kim at 10:28 AM