Seventh Grave and no Body 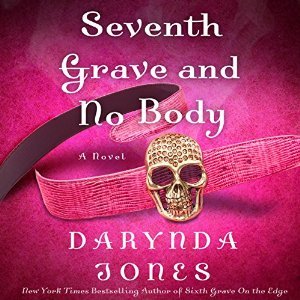 Blurb:  Twelve. Twelve of the deadliest beasts ever forged in the fires of hell have escaped onto our plane, and they want nothing more than to rip out the jugular of Charley Davidson and serve her lifeless, mangled body to Satan for dinner. So there's that. But Charley has more on her plate than a mob of testy hellhounds. For one thing, her father has disappeared, and the more she retraces his last steps, the more she learns he was conducting an investigation of his own, one that has Charley questioning everything she's ever known about him. Add to that an ex-BFF who is haunting her night and day, a rash of suicides that has authorities baffled, and a drop-dead sexy fiancé who has attracted the attentions of a local celebrity, and Charley is not having the best week of her life.

But all of that combined barely scratches the surface of her problems. Recent developments - and a few distressing prophesies - have forced her to become a responsible adult. Exactly the kind of adult she's never aspired to be. To conquer such a monumental task, she's decided to start small. Really small. She gets a pet. But how can she save the world against the forces of evil when she can't even keep a goldfish alive? A tad north of hell, a hop, skip, and a jump past the realm of eternity, is a little place called Earth, and Charley Davidson, grim reaper extraordinaire, is determined to do everything in her power to protect it. We're doomed.

I am going to claim a spoiler alert, but only for those of you who haven't been keeping up on this awesome series.  If you are up to date with Charley and her shenanigan's, then it should be no problem for you!

Charley's story picks up right where she left off in Sixth Grave on the Edge.............she's pregnant.  And in Charley fashion, we are calling the baby B.E.P., (short for Black Eyed Pea), but pronounced Beep, lol.....gotta love her!  This adventure is about Charley trying to find a way to kill the 12 without getting killed herself, or that gorgeous fiance Reyes either.  Knowing how deadly they are, Charley is more determined than ever to find out who summoned them and why.  Well, it's without saying we know the answer, but Charley wants a confession 'cause that's how she rolls.

All of the characters we know and love are present and accounted for; Rocket, Blue, Strawberry Shortcake, The Dealer, Garrett, Cookie, Amber, Artemis, Angel, Quentin, Gemma, Uncle Bob, and even her annoying ex-bestie Jessica!  For Pete's sake the girl doesn't know when to just go away, and Jessica really knows how to make Charley's Barbara hurt!  This crazy (and that term is literal for Rocket!) bunch Charley calls "family" joins forces to A) Keep Charley and Beep safe, and B) find out how to kill the 12.

Now, you know Charley can't just oh, focus on saving the world, no!  She also takes a case from Father Glenn about a haunted house, helps Ubie try to solve a string of suicides that they think are not really suicides, help a dead girl find out who and why someone stole her body from her grave, investigate her father to see what he is investigating, find out how to kill the 12, and kill them, help Garrett recover a "sample" for DNA testing on his exes baby 'cause he looks an awful like Garrett, all while dealing with major grief from Fred and Barbara for quitting caffeine cold turkey!

Let me just say that this book doesn't lack in comedy, action, or emotion.  It is so endearing to be witness to the love that Charley and Reyes feel for each other and Beep.  There are tear jerking moments between them in the book but in a good way that makes me love them even more.  I want Lego sized versions of them to keep with me at all times!  Then there are Cookie and Uncle Bob.  They are so cute with each other, but Charley has conflicting tenderness and gag-me reactions to their displays.  As we go through this new journey with Charley and her gang of misfits, more of the puzzle is unraveled, and truths are revealed.  Reyes has always told Charley she could do anything she wanted, she just didn't know how true that statement was.  The revelations at times are jaw dropping, heart pounding and filled with adrenaline moments that kept me on my toes in anticipation of what would happen next!  You will be taken closer to finding out who and what Charley really is, more than you ever have in the past!

Narrator review:  Lorelei King has been the narrator for all of the Charley Davidson books thus far.  She does an excellent performance with Charley's sarcastic and witty personality.  I have this unusual pull toward her voice for Amber, not sure why yet, but for an unknown reason to me at this time, I love it!  Her male voices are just unique enough to decipher the difference between them but not so much that you want to rip her face off.  I really enjoy her tone when speaking as Charley.  It's so calm and matter of fact, even when Charley is being a pisser.  It's that tone that makes the funny things Charley says even funnier!  How Lorelei portrays Jessica is spot on!  That is totally how I imagined someone like Jessica's voice sounding like.
I give Lorelei King 5 Fangs!


Did you find this review helpful, fantastic, or otherwise all around great?  Click on +1 please, and Follow me!
Posted by Kim at 7:36 PM