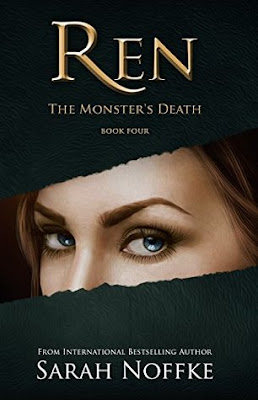 Ren Lewis is the most powerful man in the world and he’s about to prove it. God, Ren believes, has battled him his entire life, trying to use him as a pawn or punish him for his wrong doings. This man, with powers most can’t fathom, has been content to use his skills to help humanity. However, when God makes a move that will carve out Ren’s heart for the rest of his life, he makes the decision to finally outmaneuver the Almighty Creator. Using technology, philosophy, quantum physics, psychology and spirituality, Ren attempts to do something that millions of people throughout history have only dreamed of. Because he’s a strategic man, Ren plans to break God’s laws and be the first human to ever do the unspeakable.

This last installment in the Ren series is the final evolution in a man’s life who thought he never should have been born. Ren’s journey teaches him that not only does he have a heart, but that as powerful as he is, he is nothing without the love in his life. Ren Lewis will gain the power to hack the system to beat God at his own game, but will he be successful or banished to solitude?

Previously on Ren: The Monster's Adventure... Ren is surprised with a traditional road trip style family vacation, and along the way we discover that Dahlia has been diagnosed with cancer. During his time on the road, he is haunted by his thoughts and emotions while contemplating how to deal with what is happening with his love Dahlia. Now that her illness has progressed, will Ren succeed where others have failed in order to stay with Dahlia? Let the ugly crying begin!

Wow! Having no idea where the story would go with Dahlia, I was just dumb struck with how Noffke played this story out. Ren is pretty brilliant, but I never imagined he would attempt what he has in order to stay with Dahlia. He was never one for words, or displays of affection, but no holds barred this time, the stakes were raised and Ren showed the fuck up! Once it was apparent what was happening, he didn't hold back any punches, and that's when the feels started and crying began. I have loved Ren from the first book because he is brutally honest, smart, and confident, a mans man, but this side of him was new and took me by surprise with how much I needed to see his heart. And also, knowing that Rynold, Ren's father was now a live-in part of the family I never once worried for Adelaide or the baby, but with that being said, the new level 5 case involves investigating someone creating what?! Ya lets not forget the Lucidite Institutes current cases, my God!

As for endings and Ren's story, this was perfect. It's always hard to say goodbye to a series, but Ren deserved a happily ever after and Noffke delivered.

Tim Campbell drove the heart break home in the crack of his voice. He played the heart broken, and love sick Ren with brilliant style. I will miss you Tim/Ren. I hope to hear you in an audiobook in my near future. Thanks for the memories...