A Vision of Murder, (A Psychic Eye Mystery #3)

Audiobook review on A Vision of Murder, (A Psychic Eye Mystery #3) by +Victoria Laurie,
Narrated by Elizabeth Michaels 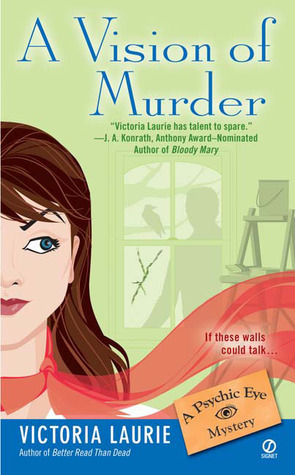 Blurb:  Professional psychic Abby Cooper has invested in a fixer-upper, hoping to make a killing in the real estate market. But a killing of another kind puts her plans awry, as the ghost of a murdered woman and some troublesome poltergeists lead her into a mystery that stretches all the way back to World War II.

Review:  Abby's story continues after her dealings with the mob from the last book, Better Read than Dead, with her taking a much needed break from her psychic business after reluctantly listening to her "guides" about clearing her calendar for the month of January.  Abby is packing her bags from a short holiday stay with her sister Cat, anxious to get on the road with her man Dutch on a much anticipated getaway, where they both hope to FINALLY consummate their relationship.  Just as she's ready to leave, two things happen, 1)  her sister ropes her into flipping a house with her and Dave, her handy man, and 2)  she gets a call from Milo, her detective friend, about her coming home right away because something has happened to Dutch.  And just when Abby thought she would have a calm, soothing vacation!

Once Abby returns home, she is informed that Dutch has been injured on the job, in a very humorous way I might add.  However, it's not a life threatening injury.  She is relieved, briefly.  Dutch has been sent home early because he told the doctor that he had someone who could nurse him back to health at home...........Ya, who's that?  Abby asks, "You," Dutch replies.  "No shit!"  Abby thinks.  Abby was totally blindsided with Dutch's presumption that she wanted the nurse position and, quite frankly, a little miffed with him.  The pent up anger eventually gets to her, and they have a big blow out with each other.  Will this be the undoing of their relationship??  Who knows?

The next pain in Abby's ass is this house she was suckered into flipping with Cat and Dave.  She goes to the house, and it's an absolute dump!  She can't believe her sister bought such a shit hole!  Boy, Dave really has his work cut out for him!  Then, to make matters worse, on Dave's first day working on the house, he is scared shitless by an evil ghost!  Great!  The house is haunted, on top of being a dump!  Abby just can't catch a break.  Dave calls Abby over in a frantic panic, and when she arrives, he is damn near in the fetal position waiting in his truck!   After going inside and confirming, yes it's haunted alright, Abby now has to find out who is haunting her new investment property and why before her sister can pitch a fit over the delay of the renovations.

Speaking of Cat, she is really starting to get on my nerves!  I don't know if I can empathize with her or care about her little problems after the way she seems to poo poo on Abby's abilities.  Cat doesn't take what Abby is or does seriously.  Example, in book 2, Cat actually has the audacity to try and read Tarot cards!  She thinks all you have to do is learn what each card means.  Are you kidding me?!  What an ass!!!  Now, she's not taking the house being haunted seriously and is telling Dave to stop being such a big baby and go in there and get to work.  Man...she seriously needs to be bitch-slapped.  I'm just saying.

During Abby's investigation of the former occupants of her new haunted house, she is taken into the most horrible part of the history and finds out that the ghost was, in fact, an evil ass when he was living as well.  Go figure!  So before all is said and done, Abby gets beaten up, shot at, and has an emotional fall out with her boyfriend and her sister.  Kinda surprised she isn't in some serious therapy!  This series has me wanting more with each book I finish!  I can't wait to find out how things turn out between Cat and her parents, Abby with Dutch, and poor Dave with his traumatic ghostly encounter.  Stay tuned!

Narrators review:  Elizabeth Michaels does a wonderful job of telling Abby's story.  Elizabeth, I would say, is a good "reader" and not "performer,"  She doesn't do different voices for the various characters.  She's just straight forward reading but with some emotion when the character is calling for it.   Elizabeth's voice does seem to fit Abby's character very well, and I really enjoy her voice.  I rate her at 4 Fangs.  Good job, Elizabeth!


Did you find this review helpful, fantastic, or otherwise all around great?  Click +1 please, and follow me!
Posted by Kim at 7:39 AM