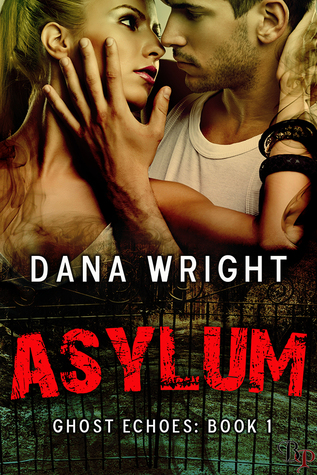 Blurb:   The voices of the past are alive behind the iron gates of Bremore Asylum.  Can Rachel and Matt deduce its secrets before it's too late?

When Rachel agrees to take the job investigating the disappearance of a fellow ghost hunter at Bremore Asylum, she is totally unprepared for the sexy and stubborn psychic debunker Matt Rutledge to be part of the package.  Can these two opposing forces find the answers behind the asylum's crumbling walls before they become the newest victims to the asylum's grim history?

Review:  Rachel Winestock is a psychic, a gift that has been passed down from generation to generation from her mother's side of the family.  Nana, aka Gretchen Krause, is Rachel's only living relative left, and she is living at the Glendale Retirement Home where she is being mistreated, according to the evidence of bruises on her arms.  Rachel is desperate to move her to a safer and nicer place and accepts a job from Harold Danvers, the proud new owner of Bremore Asylum.  When Nana finds out about Rachel's new job, she warns her to stay away!  Nana then decides to share her horrible past about her time spent at the asylum when she was young.  The story and the snooping Rachel did while Nana was sleeping reveal awful, heinous behavior from the staff to the patients.  Rachel is determined more than ever now to go there and try and help the lost spirits that may be trapped there.

When Rachel arrives to meet Mr. Danvers, she is not alone.  Also attending the meeting is Matt Rutledge, the host of the popular cable show "Debunk This."  The man oozes arrogance and has spent his whole career mocking psychic investigators as frauds.  Great, she hated the man from episode 1, but when she see's him live and in-color, he is knock out sexy as all hell!   Rachel, "If only he didn't make her want to kiss him at the same time as she wanted to punch him in the face.".   Houston, I think we have a problem.  And the other person attending is Trevor James, Danvers assistant.

Danvers explains to them about how another ghost hunter, Misty Duncan, disappeared after doing an investigation at the asylum three years prior.  Danvers wanted Matt to find out what could have happened to Misty and for Rachel to reach out to the dead and see if Misty was there and to report if any other paranormal activity was happening.  He was sending Trevor with them because he was with Misty on her investigation and was the last one to see her alive.  Maybe Trevor would be able to guide them to the last known location within the very large asylum.

After the trio arrive at the asylum, Matt and Rachel chit chat about their initial feelings about the whole investigation and Trevor's part in it.  They both feel like something is off with Trevor by his attitude and demeanor, so they make a pact that they will have each others backs.  In order for Rachel to go to the past so to speak, to communicate with the dead, she needs an anchor.  She usually has her partner Jeannie with her, but she was severely injured on their last assignment and is still recovering.  Rachel is taking a huge leap of faith that Matt will honor their pact, considering he is a skeptic to say the least.

I found the history and background with Nana and Rachel to be quite interesting, in that they both had the gift, but Rachel's mother didn't appear to.  Nana was put in the asylum by her mother for being able to see shadows.  Rachel was going to be committed by her own mother as well for the same reason until Nana stepped in and took Rachel into her home.  Then you have the relationship between non-believer and psychic.  One would have never thought that these two would ever be the center of a love story, but the way the story unfolds gives it such simplicity that how could they not?  I truly enjoyed the ghost hunting aspect of the story and the fact that Rachel uncovers new abilities she didn't even know she possessed!  These new discoveries took the story up a notch along with the nail-biting excitement!  I look forward to reading the next installment of Ghost Echoes :)


Did you find this review helpful, fantastic, or otherwise all around great?  Then Click +1 please, and follow me!
Posted by Kim at 9:40 AM