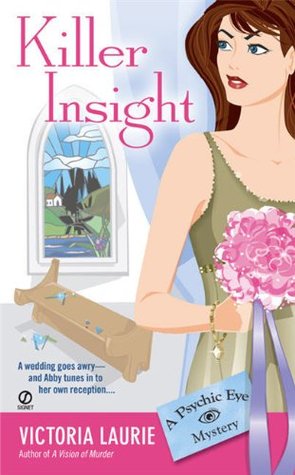 Blurb:  When her relationship with FBI agent Dutch Rivers skids to a halt, Abby Cooper is fully aware that a wedding isn't the best post-breakup scenario.  But when a friend from the Mile High City finds herself short of one bridesmaid, it doesn't take a professional psychic to see the opportunity for a much-needed getaway.

High altitudes can be healing, and Abby reunites with friends-especially her childhood crush Duffy McGinnis, now town sheriff, not to mention tall, dark, and yummy.  But Abby needs more than a shoulder to cry on.  One bridesmaid after the next is mysteriously flying the coop, and Abby's intuition tells her their final destinations aren't pretty.

With the wedding party falling apart and her gift of sight never so foggy, Abby has to save the date-and herself from becoming the next taffeta-clad target...

Review:  The book starts out with Abby and Dutch preparing for Valentine's Day, (well Abby was, apparently not Dutch), and their trip together to Colorado for Abby's friend Elle's wedding.  Abby appears to be having some trouble during a reading with miscommunication with her client, and she should have known better!  This sets the stage for the rest of the book, and it ain't pretty people!  I don't think there have ever been this many tears and laughter rolled into one book until now.

As Abby prepares for Dutch's arrival, she cooks (and I use that term loosely!) a steak and potatoes dinner and gathers up all the wonderful gifts she bought for him.  Dutch arrives, and being the gentlemen he is, he refrains from outright laughter and cruelty that he could unleash onto Abby about the horrific meal she has prepared.  Now I realize that their are certain times of the month, or year, that when moons, planets, stars, whatever, don't line up just right or do, that they cause havoc, especially for psychics, but my god, you can't blame what Dutch did next on any of that but just being plane ol' dumb guy!  Abby gives him multiple gifts for Valentines Day, all very thoughtful and expensive, like a watch and a cashmere sweater.  What does Dutch give her, you ask?  A cell phone.
I need not say anything else...

After the nightmare of a Valentines dinner, Abby has noticed something off about Dutch for a while now, but hasn't been able to put her finger on it until JUST NOW.  This prompts a heated discussion that ultimately ends their relationship.  She orders Dutch to get the fuck out and cries on Dave's (her ex-handy man, now business partner) shoulder.  Dave is successful in talking Abby into going to her friends wedding to get some distance from the situation with Dutch and clear her head.

In Colorado, Abby is taken back in time to when she was a little girl.  Her friend Elle couldn't be more happy to see her, especially after one of her bridesmaids running off after an ex and leaving her short a bridesmaid.....good thing Abby came!  As Elle figures out where to put Abby up during her stay, we are introduced to a hilarious family!  Well, the only real funny one is Aunt Vivian!  This old lady was a riot!  She was old, yes, but not crazy, or senile.  She just had no filter, it was great!  So this is who Abby got to stay with, haha!  She loved it though, 'cause she was the only one who took the time to talk to her like a normal person and not like she needed to be committed.    Then there was Duffy, Elle's big brother....oh ya!  Of course, he's a hottie and single ; )  It doesn't take Abby and Duffy long to "reunite."  Elle's parents, Nina and Jimmy (who were more loving and understanding than Abby's own parents!), have still remained to be nice, caring folk and welcome Abby in with open arms....awww.

Speaking of parents.....to jump off the plot for just a moment, Abby's parents end up coming for the wedding also!  No thanks to Cat, Abby's sister!!  Cat is really pissing me off now!  Abby's parents are douche bags!  And that's being kind!  They are selfish, manipulative and shallow.  They make Cat and Abby call them Claire and Sam instead of mom and dad, for Pete's sake!  Since they were kids!   Then when the shit hits the fan, Claire is overheard telling  another guest by Cat that she thinks Abby isn't really her and that the nurse brought her the wrong baby from the nursery!  This hag is a piece of work!

On to the plot!  So Abby gets involved in trying to solve the whodunnit with sheriff yummy cakes, Duffy, oh did I forget to mention that part?  Focus...yes, bridesmaids are slowly disappearing, and the evidence is pointing it's bony, creepy finger at none other than Elle's fiance, Eddy!!  Everyone starts hatin' on Abby for being the one who instigates the "looking into" of Eddy's whereabouts at the time of the disappearances which causes Elle serious stress and jeopardizes the wedding plans.  Boy, Abby really knows how to crash a party!  Speaking of party....remember when Aunt Viv told the whole bridal party about how Duffy was "working his swimmer's out" on Abby?  LOL!

At this point if you're asking yourself, "What happens with Dutch and Abby?",  "Do they get back together, or does Abby think about moving to Colorado to see where this "thing" with Duffy goes?", "Do Abby and Duffy find out what has been happening to the bridesmaids?",  "Is Eddy really, in fact, a "bad guy?",  "Is there a damn wedding or not?!",  and "Was Abby really switched at birth?", then you're hooked, and you have no choice but to get this book now!  It is awesome, funny, scary, and heart warming.  Enjoy : )

Narrator Review:  Elizabeth Michaels returns as the reader for this series.  She continues to do a good job with the characters.  I'm glad that, with each new set of characters we are introduced to,  Elizabeth doesn't feel the need to re-invent herself by changing voices and/or "acting" the scenes out because she is doing a wonderful job, as she has been thus far.
I give Elizabeth 4 Fangs!


Did you find this review helpful, fantastic, or otherwise all around great?  Then Click +1 Please, and follow me!
Posted by Kim at 3:14 PM