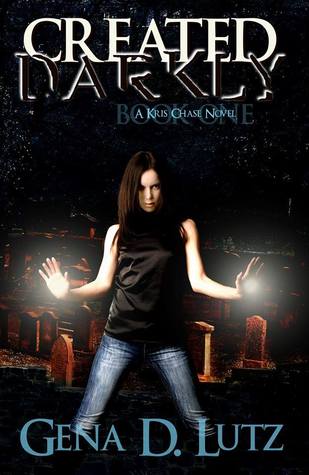 Blurb:   Necromancer Kris Chase's purpose is simple.  Blindly raise the dead for the primary elite, self necro-governed group, The Center.  The problem is, she couldn't care less about what the Center expects from her.  Instead, she is more content with snuffing out the life-force from every vile creature she can get her hands on; the same monsters her brethren indiscriminately create...for the right price.

Until the life of someone dear to her is threatened.

With the stakes raised insurmountably, she finds herself bound by desperation to create the very darkness she always fought against being consumed by, going against everything she has ever believed in.

Review:  Let me break it down for you in a more entertaining way...  So Kris is the main character of the book, and she is a necromancer, which is a person who can see ghosts and raise the dead in the form of a vampire.  Yes!  She can create vampires!!  However, Kris has a rebellious streak in her that prevents her from doing her formal duty, and instead she hunts and kills said vampires.  Kris's vampire hunting/killing extra curricular activities are being kept a secret from her dear, so called innocent, younger sister, Torra.  Kris was forced into early motherhood with raising her younger sibling after their mother abandoned them.  Then, one day, Kris receives a visit from Rush Davis, a council member for "The Center," notifying her of Torra's abduction from "The Center's" parking garage.

Oh my gosh, where do I start!  So, Kris has been killing the vampires that she has been led to by the ghosts of the people that the vampire killed.  She seems to have a strong need to help ghosts however she can, which leads us to her best friend, Jude.  He is a ghost who refused to "go to the light" and to tell her how he died.  Jude is content with living with Kris and helping her with her mercenary lifestyle.  Kris is also uneducated thanks to mother and the Center about her powers, how they are to be used and about the history of her own family and the Center's.  So, she is sporting the Clueless badge with Alicia Silverstone.
Rush is a necromancer like Kris, but unlike Kris, he and his family for generations have served the Center and are a very wealthy family of high standing.  He has also been periodically calling Kris to try and get her to come and join the Center, but with her stubborn streak, the attempts smack him in the face.  Rush has only been reaching out to Kris in his weird way to keep close to her because he has a major boner for her! Torra is, as far as Kris is concerned, unaware of all this necromancer business and has just graduated High School and is getting prepared to go off to college when she is kidnapped.

The kidnapping takes place in the Center's parking garage where a note was left by the kidnapper, addressed to Kris.  In the note, she was left strict instructions to leave the Center out of this and that he will contact her by phone with the next instructions.  So in Die Hard with a Vengeance fashion, as Simon leads John McClain through riddled tasks, Kris blindly goes where Wolf, the kidnapper, tells her to.  By her side to assist are Jude and, unknowingly, Rush.  Rush had decided on his own to watch over Kris, his woman, to make sure no harm comes to her.  Even though Kris is very anti-Center, she can't deny the attraction she has to Rush, and in the mist of solving the riddle, we watch the bond form and the sparks fly between these two knuckle heads and even partake of some bow chicka wow wow in between.

As this unlikely trio pushes forward in a rush to find Torra and discover who is behind the kidnapping and why, Kris uncovers some serious family secrets that blow her mind!  It seems that no one in this family is honest or trustworthy of each other, and instead of comprehension occurring, only more questions and confusion come to plague Kris.  This story was filled with so many intriguing characters that Kris obtains knowledge from and even, dare I say, becomes friends with, that she was just about forced to take off her blinders and see people for who they really were and not what she perceived them to be.  I found it really sad also that Kris did not know her own heritage.  She had to find out about her own abilities and descendants from strangers!  She had no clue what she was capable of doing!  How embarrassing, right?  And the fact that Rush, and everybody else for that matter, gave her massive shit for it was unbelievable!  But, then again, I guess we all do that on a daily basis, like assuming the cashier at Wal-Mart knows how to ring up a coupon or that a librarian knows how to find a book!

In the final chapter of the book, I was glued to the virtual pages on my Kindle!  The story had taken me from point A to B in such an incredibly creative, intriguing way, I never thought for one second I could guess how this story would end!  I can't wait to read the next book to find out how everyone falls into their places, especially with Rafe and Torra, wink wink, not telling you about Rafe.  He's a story of his own that you will have to read for yourself!

Did you find this review helpful, fantastic, or otherwise all around great?  Then Click +1 please, and follow me!
Posted by Kim at 8:17 PM