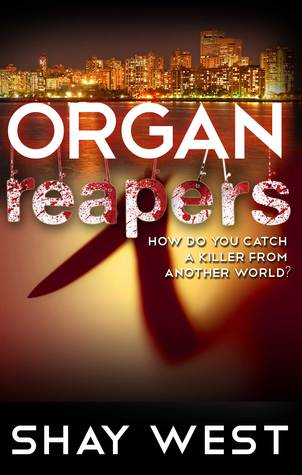 Blurb:   Detective Elliott "Eli" Robinson and his new partner, Ava Aguilar, are baffled by a series of brutal murders happening in their fair city.

No evidence, no eyewitnessess...only mutilated corpses with missing internal organs.

When Eli and Ava stumble upon evidence of similar gruesome crimes around the globe, they realize there is more to the murders, but the answers continue to elude them.  In a race against time, Eli and Ava must figure out who is behind the killings and stop them before more people die.

But the answers will take them out of their comfort zone and into the realm of the fantastic: another world with a different set of rules, and a leader who has no qualms about killing.

Review:  This interesting book is about two sets of partners, on two different planets, but both face  life altering decisions that intermingle with one another.  The story follows Tani and Keena from another planet far, far away, and Detective Elliott Robinson and Detective Ava Aguilar from planet Earth.  Tani and Keena are "Harvesters", and this duty is a highly regarded station on their world. Their job is to travel through the "Gateway" to earth and retrieve organs from a human in order for a person on their world to survive.  And of course Detectives Eli and Ava are working the "Butchers" case, the murdered victims with missing organs.  That is the short version of what the book is about!

The characters in the book are very easily sympathized with, despite the fact that their beliefs seem ass backwards and bat shit crazy!  Tani and Kenna grew up believing that Master Kelhar, the priest of the monastary, has been gifted visions by their "God", which is how the harvesting began.  It seems that on this other planet, ignorance is prevalent, and a con-artist can get away with murder, by simply leading the idiots to believe "God" told him to.  So one day Kenna reveals to Tani that she can not bring herself to take another life.  She feels that it is wrong, even though it does save a life on her world.  Tani agrees with her, but is more unwilling than Keena to do something about it at first.  Since Harvesters are high stations, their families reap the benefits as well, and indulge in the finer things in life, which was far from their poor status in society previously.  Keena is scared to death that the monastary will kick her family out if she defects, well duh!  Ya think!!  Now, I never said these two kids were the brightest!  When Tani and Keena get on the same page and run together, where is the first place you think they go?  Once guess is all you need...
They ran to their family's home, and of course they are gone already and the house is being watched.  Even though they know that the monastery will be tracking them to their families, they are determined to find them and let them know why they ran.  The fact that these two simpletons even questioned the all and powerful monastery's beliefs and actions about harvesting is the only reason I allowed myself empathy for them, and continued curiosity for the rest of their story.

On earth, Eli is the lonely alcoholic divorcee detective that is working the case.  His Captain, Dean Platt, partners him with a female knock out by the name of Ava Aguilar.  The two are absolutely stumped with the "Butcher" case, because none of the witnesses actually see or hear anyone, except for a brief flash of light right before discovering the bodies.  As the body count rises, the tension between the partners grows, as well as Eli's attraction towards Ava. I would have appreciated some naked slap and tickle scenes with Eli and Ava, but...

When the next victim's cell phone reveals a selfie that caught the killer's image behind her, the detectives seek the help from the FBI.  The FBI's recognition search discovers the same man in a surveillance photo in another country, where the same type of murder took place.  This new discovery only opens more questions for the partners, and leads them to wild and crazy accusations.

The moral of the story is, never give ONE person that much power over the people!  The story was good, but not gripping.  At times I found myself rolling my eyes, and wanting parts to be done, because they just seem to drag on with mundane tasks and chatter.  When I got down to the nitty gritty at the end of the story, I was expecting something spectacular and outlandish for the big reveal that the story led up to, but was slightly disappointed when it fell short.  Only slightly because I should have seen it coming, especially the way the characters Tani and Keena were written, with them being so naive, ignorant, and simple, etc...

The story had so much potential as far as Master Kelhar was concerned, and also about the "Gateway" machine that allowed them to transport to earth, but instead I was left with many unanswered questions.  So I give a letter grade of A for storyline but a C for follow-thru, and that is how I came to a 3 Fang Rating.  Since this story voids sexual content, and actual detailed descriptions of the murders, I would recommend this book for ages 13 and up.

Amazon and Barnes and Noble

Did you find this review helpful, fantastic, or otherwise all around great?  Then Click +1 please, and follow me!
Posted by Kim at 4:26 PM