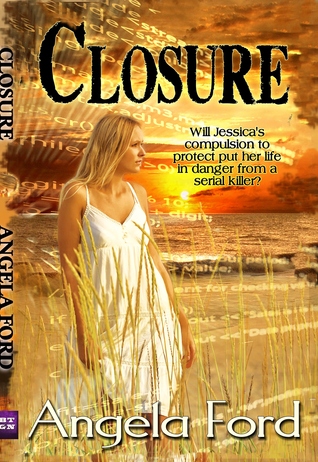 Blurb:  Exciting new romantic suspense from debut author, Angela Ford.  An elite FBI task force tracks online predators while they hunt their prey.  A series of murders in Presario Heights has forced Special Agent Jessica Resario to follow her gut instinct to save the next victim.  Supervisory Special Agent Tom Erickson removes her from the case.  The only place to escape the danger is her family beach home.  She hadn't been there since her parents were murdered.  The level of intensity climbs higher with her discovery of postcards marked "I Crave You".  Old ghosts, secrets, imminent threats and an inevitable attraction to Tom send her on an emotional roller coaster.  If that wasn't enough, she opens the door to a man she thought was dead.  Tom is stabbed and his case files go missing...high emotions put Jess at the killer's mercy.

Review:  This book has action, drama, and suspense, it's madness!!  I should totally be a book promoter....oh wait, I am!  Haha...
The story involves an FBI special units team, named "Internet Security Task Force" or ISTF for short.  The man in charge of this special unit is Tom Erickson, and his team members are Jessica Resario, Mike Turner, Gina Edwards and Eric Matthews.  Their sole purpose is to seek and destroy internet predators.  Plus, Tom and Jessica have the hots for each other but refuse to act on their feelings, even though like, the whole office knows they have the hots for each other.  Nothing like a good pedophile hunt to start a relationship, right!

Their latest case has them chasing a serial killer.  He has currently killed three young teenage girls, and is on the hunt for his next victim.  Tom and his team are desperately trying to get one step ahead of this guy before he kills again.  Jess likes to run on her "instincts" rather than protocol, has a "feeling" of where the scum will hit next and jumps the fence to rush and intersect his next target.  Doing so brings her face to face with the psycho, and she barely gets away with her life!   After phoning in to Tom and her identity being revealed to the killer, he orders her to go to a safe location and stay there until it is safe for her to return.

The next step for the team is to try and lure the killer out into a trap, so Tom arranges for Eric and Gina to go undercover.  Eric will play the "dad," Harry Rothburn Jr., a rich, well known son of a business dude, and Gina will be his daughter, Melissa Rothburn.  Gina will infiltrate the private high school as a senior student, get cozy with the "in crowd," and arrange a party at her place when daddy is away.  While the team is hard at work, Jess returns to the family summer home in Vineyard Haven, a small beach community on the east coast.  And it just so happens to be where her parents were murdered right after she left for college.  This being the first time Jess has been back there since the murders, she is unprepared for the emotions just being there will bring.  While Jess is there, she uncovers who her father worked for and what he did, a potential lead on who may have killed them, and she has to maybe, just maybe, allow herself to ponder and reflect on her true feelings for Tom.  I mean, come on!  Why would working on hunting down sick psychos put a damper on your love life!

The story line was very good.  It reminded me of that television show Criminal Minds.  I totally love that show, and it was like reading an episode! With that being said....the romance part of the story line was a total disconnect for me.  Don't get me wrong, I love my romance novels, but with the main story of hunting a serial killer and the drama of that, I feel like the romance took a back seat and didn't have the opportunity to bloom and flourish throughout the book.  I can't wait to read Forbidden which continues to follow Jessica's story.  My hope is the love/work relationship have more of a better flow to it.


Did you find this review helpful, fantastic, or otherwise all around great?   Then Click +1 please, and follow me!
Posted by Kim at 9:18 AM