Today's prize is provided by yours truly!  I am giving away an E-book of
Hellhound by Rue Volley

**This version contains all four books in the Hellhound series.** 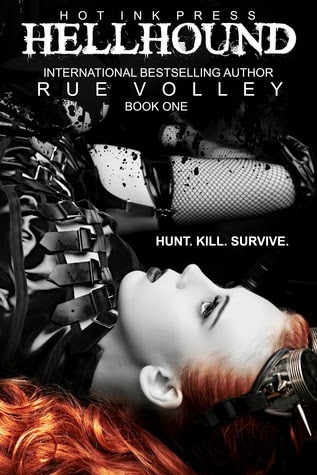 First in a brand new series about a Chicago graduate student's introduction into a society of vampires.


Sure, the life of a graduate student wasn't exactly glamorous, but it was Merit's. She was doing fine until a rogue vampire attacked her. But he only got a sip before he was scared away by another bloodsucker and this one decided the best way to save her life was to make her the walking undead.

Turns out her savior was the master vampire of Cadogan House. Now she's traded sweating over her thesis for learning to fit in at a Hyde Park mansion full of vamps loyal to Ethan Lord o' the Manor Sullivan. Of course, as a tall, green-eyed, four-hundred- year-old vampire, he has centuries' worth of charm, but unfortunately he expects her gratitude and servitude. But an inconvenient sunlight allergy and Ethan's attitude are the least of her concerns. Someone's still out to get her. Her initiation into Chicago's nightlife may be the first skirmish in a war and there will be blood.

This is a great beginning to a great series! Merit is a strong, independent, and sassy woman. When she meets Ethan for the first time it sets the stage for their interactions for the entire series. Merit doesn't put up with his crap and his "I'm the boss" attitude. She didn't ask to be changed into a vampire after all...let's just say she does things her own way and it both frustrates and intrigues the master vampire.

If you haven't started this series yet, now is the perfect time :)

To be entered in the giveaway simply return to my Facebook page and leave a comment on your favorite moment from a book you've read this year, tag and share!