Book review on What's A Ghoul To Do?, (A Ghost Hunter Mystery #1)
by +Victoria Laurie 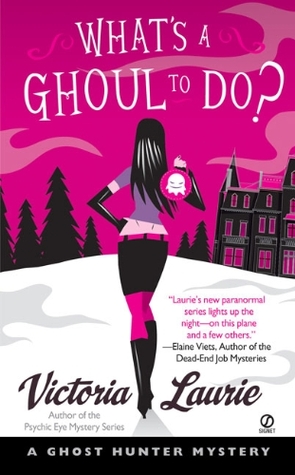 Blurb:  M.J., her partner Gilley, and their client, the wealthy, de-lish Dr. Steven Sable, are at his family's lodge, where his grandfather allegedly jumped to his death from the roof-although Sable says it was foul play. But the patriarch's isn't the only ghost around. The place is lousy with souls, all with something to get off their ghoulish chests. Now M.J. will have to go quell the clamor-and listen for a voice with the answers...

Review:  Let me just say, I read the newest book first, No Ghouls Allowed, and had never read any of the books in this series.  Although I thought it wasn't hard to follow, I do believe that reading the newest one first was a blessing.  No Ghouls Allowed takes us to M.J.'s beginning, literally.  I'm glad that this is the way things turned out because now I have all the other books to look forward to reading!  This story is about M.J. Holliday, a psychic medium, with a huge heart and a need to help lost spirits move on to the light, or dark, whichever the case may be.  M.J. started out doing readings but got burned out, and switched to ghost busting.  Her best friend since the first grade, Gilley Gillespie, has been by her side through thick and thin and has ventured into the paranormal world with M.J. as a partner in the ghost busting business.  M.J., being a descendant of the infamous Doc Holliday, has chosen to name her African Gray Parrot after him, and I mention Doc because he plays a supporting role within the story.

The story takes place in Boston, where M.J. is sought after by a gorgeous surgeon, by the name Dr. Steven Sable II, to investigate the lodge where his grandfather committed suicide.  Steven doesn't believe his grandfather would do such a thing, knowing how happy his grandfather was, and suspects foul play.  Their have been unexplained phenomena taking place in the lodge since his passing which brought forth the idea that Andrew, Steven's grandfather, was haunting the place.  After much reluctance, M.J. agrees to take the case and packs her bags to go up north a few hours to where the lodge is located.

The book starts off with a BANG!  Gilley set up a job for M.J. with a realtor on a house that has been on the market way too long for the neighborhood it's in, and the state of the house's energy is what is causing the problem.  M.J. was informed by Gilley (confirmed by the realtor) that two people have been killed in that house.   This is the part that clues you in to how M.J. works, and how gifted she really is........it's awesome!  She enters the house and can feel whenever a ghost is present.  She feels two of them.  Now this is the freaky part; she reaches out to the female spirit, and after some coaxing, she is able to get the ghost to open up to her and "show" her what happened to her when she died.  M.J. can hear the ghost and, therefore, is able to communicate with her.  After getting the ghost to acknowledge what happened, she guides her to the lighted path to "move on."  The description of the process was so heart-wrenching, I was in tears. ( I didn't realize 'til now that the experience reminded me of the television show, The Ghost Whisperer.  I had a love/hate relationship with that show!  I loved it because of the fact that Jennifer Love Hewitt's character was a psychic medium that could communicate with the dead, and she helped them to let go of what was keeping them here, to give their loved ones peace and to "cross over."  But when Jennifer's character got to the part where the ghosts finally opened up and told her their story, Niagara Falls baby....every single episode.  I knew it was coming, but I couldn't turn away, like a train wreck, just can't deny the attraction to watching it, even though it made me cry, every damn time!!!)

Then there is the meeting with this new potential client M.J. has to get home to quick-like.  She arrives in time but not before having to drive behind a dude going really slow and on his phone. Gilley and Doc are carrying on as soon as she walks in, and then the client arrives.  He's a to-die-for, yummy doctor who is stupid rich, and he wants M.J. to do a job for him!  But Dr. Delicious (the name Gilley used to refer to the client, which Doc quickly picked up on and yelled out at inappropriate times) wanted to be part of them team during the investigation, which is M.J.'s No-No Rule #1.  He walks out, not accepting those terms and taking his business with her.  Now, she has to get ready for a blind date that Mama Dell, from Mama Dell's Coffee Shop, set up for her.

The characters were such a good fit together and had me laughing out loud throughout the book.  Mama Dell was a southern belle who lived in Boston for 30 years with her husband.  She opened up a coffee shop not knowing a damn thing about coffee and made the worst coffee ever, which made her an inside joke to the locals, but also made the shop very popular.  One thing Mama Dell was good at was matchmaking.  She even had profiles for people to fill out, LOL!  Gilley was as gay as gay could be, and he didn't care who knew it!  He has a very no nonsense, take no crap personality, but he also is very quick with the sarcasm and jokes.  M.J. is a workaholic with no time for a dating life.  I'm not sure if this attitude was drawn from her mother dying at such a young age or from the fact that she hasn't met the right guy yet- one that takes her abilities seriously.  So M.J. going on this blind date that Mama Dell set up for her was a big deal.  Then there's Teeko, aka Karen O'Neal, M.J.'s best friend.  Teeko is a knockout, hence the name Teeko which came from TKO (total knock out).  She didn't play much of a role in the book, but when she did, it was always in the coffee shop, talking about men.

After listening to a lecture from Gilley about business and her unwillingness to grow and change,  M.J. arrives to the conclusion that he is right and accepts the job from Dr. Delicious, THANK GOD!   Dr. Steven Sable II is a hunk of burning love from Argentina.  He went to private schools in Germany, speaks five languages, and did I mention he was very lick-able??  English is a work in progress for him, which gives him charm and personality.  Misuse of the language had me rolling with laughter and thanking the stars this book series was brought to my attention.  I loved every part of this book, funny, scary and sad.  It was a well-written story with super awesome characters who gave M.J.'s world the perfect balance.


Did you find this review helpful, fantastic, or otherwise all around great?  Then Click +1 please, and follow me!
Posted by Kim at 10:49 PM