Book review on The Job, (The Fox and O'Hare series #3) by +Janet Evanovich
and Co-written by +Lee Goldberg
A Mystery/Suspense Novel
**Book provided by the author for an honest review** 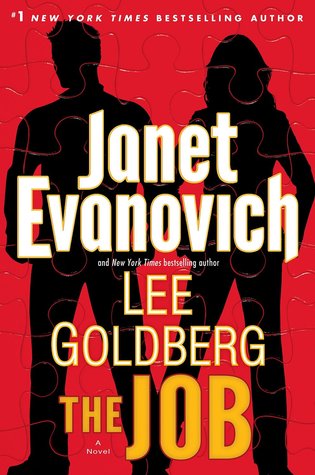 Blurb:  Charming con man Nicolas Fox and dedicated FBI agent Kate O'Hare secretly take down world’s most-wanted and untouchable felons, next job Violante, the brutal leader of a global drug-smuggling empire. The FBI doesn’t know what he looks like, where he is, or how to find him, but Nick knows his tastes in gourmet chocolate.

From Nashville to Lisbon back alleys, from Istanbul rooftops to Thames, they chase clues to lookalike thefts. Pitted against a psychopathic bodyguard Reyna holding Kate hostage and a Portuguese enforcer getting advice from an ancestor's pickled head, they again call driver Willie for ship, actor Boyd for one-eyed Captain Bridger, special effects carpenter Tom, her father Jake - retired Special Forces, and his talent - machete-wielding Somali pirate Billy Dee. This could be their biggest job - if they survive.

Review:  One thing I would like to start out by saying is I have never read books one or two, and had no idea this book was #3 in a series.  The book could be a stand-alone read.  For a first time reader of the series, the story has a cute twist to the relationship between the main characters, Kate O'Hare and Nick Fox.  Kate has spent years chasing and tracking Nicholas Fox, a world class cat burglar and con man.  Now that she has caught him, she is forced to work with him.  Nick made a deal with Kate's boss, Carl Jessup, and Fletcher Bolton, shortly after his capture.  To avoid prison, Nick has agreed to work with the FBI in tracking and identifying criminals, most likely ones he has worked with or for, yikes! Snitch much?  So, for one, this doesn't put Nick on my good side.  I hate snitches and especially ones that will turn on their own kind.  I spit in your eye!.

The chase starts out in Nashville, TN,  when a million dollar Matisse is stolen from the Gleaberg Museum of Art in broad daylight!   Kate quickly discovers that Nick is being set up.  The thief has disguised himself to look like Nick!  Of course everyone automatically believes it's Nick, except for Kate....only cause he's a sly charmer ;)  This doesn't slow down Kate or Nick one bit from following the clues.  The case jumps from Nashville to Instanbul, and BOOM, I'm lost as far as direction, food, and language goes.  My senses immediately take me to Willy Wonka and the Chocolate Factory, because everything from here on out is total ridiculous nonsense that I make up!  It's totally ok though, cause boy do I have a great imagination!!

In the middle of the investigation, Kate and Nick are forced to hire a crew to help them complete their mission, to catch the bad guy, Violante.  This is when we are introduced to the misfits.  The first brought in is Jake O'Hare, Kate's father.  He is an ex-military, special ops, I am the one they send to kill you, and when I do, you don't even know you're dead guy.  She needs muscle and weapons, and boy does he deliver.  I loved Jake's character!  He was the kind of dad that showed his little girl how to kill a man with whatever is available to her in her lunch box!  Jake brings along with him his friend, Billy Dee Snipes, scary man, very scary.  Hilarious name!  The references to movie characters in this book are to die for!  As for Nick, his people consist of Tom, the cool dad that can build anything, Willie, the fearless middle-aged mama that can drive anything, and Boyd, the method actor that gets a little bit too involved in his character but can play anyone!

The target.....Demitri Violante.  He is an international drug lord and a lover of fine, very expensive chocolates.  His evil side kick is Reyna, this scary bitch that likes to torture people.... for years.  In order to find them, the crew have to basically con them and create elaborate stories.  Nick is very good at that and loves to play pretend.  His habitual TV character names for his aliases are downright hysterical.  I mean, who else would think while in France to use the name Jean Luc Picard!  And the fact that he could do it with a straight face, I was dying!!  The chemistry between Nick and Kate was awesome.  They worked very well together, despite the fact that Kate supposedly hated working with a criminal- that she secretly has a crush on and won't even admit it to herself.  Nick was a very charming, flirtatious, resourceful young man who had a crush on Kate but had no shame in it and loved working with Kate but didn't like all the rules the FBI put on him.  These two were able to work through it and kick ass!  I found the story, characters and ending to be very funny, creative and intriguing.  I loved every page of the book, even the ones that made me feel like I was getting a geography or history lesson.  Between my imagination,and Janet and Lee's story telling, we had a winner of a book!


Did you find this review helpful, fantastic, or otherwise all around great?  Then Click +1 please, and follow me!
Posted by Kim at 4:59 PM