Demons Are A Ghoul's Best Friend, (A Ghost Hunter Mystery #2)

Book review on Demons Are A Ghoul's Best Friend, (A Ghost Hunter Mystery #2)
By +Victoria Laurie 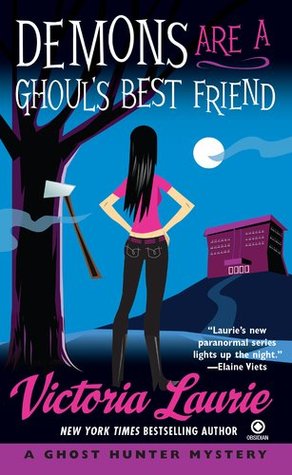 Blurb:  Northelm Boarding School on Lake Placid has the worst bully of all-a demon by the name of Hatchet Jack.  M.J. Holliday, along with her partners Gilley and the handsome Dr. Steven Sable, are ready to send him back to the portal from whence he came. The school's summer construction, an uncooperative dean, and the very tempting Dr. Delicious are all trying to distract M.J. from her ghost hunting. But with a demonic disturbance as great as Hatchet Jack, she must focus and show no mercy to send him to detention for an eternity-in hell.

Review:  Book two of the Ghost Hunter Mysteries continues where Book 1 left off......Dr. Steven Sable, aka Dr. Delicious, has taken a teaching position at the University of Massachusetts ever since he was shot in the hand from the job he hired M.J. and Gilley for.  Unable to perform surgery, he now gives lectures at the University.  The good doctor has generously invested in M.J. and Gilley's ghost busting business to keep them afloat and to also be near M.J.

Business has been slow ever since her job for Dr. Sable, and as if on cue, Karen, aka Teeko, M.J.'s best friend shows up with a job for her.  Karen's niece Evie has been attacked at the boarding school she attends!  Karen's brother Kevin is your typical skeptic of anything paranormal, so Karen goes through his wife Leanne to get permission for M.J. to talk to her about the attack.  It turns out that Evie was chased by a ghost the local kids call "Hatchett Jack." Jack has been haunting the school's old elementary wing and the surrounding area since the 1970's.  With an increase in the school's population, the dean is having the old elementary wing remodeled into dorms, and the kids are terrified to live there.

When the team arrives, Karen sets up a meeting with Dean Habbernathy, and the meeting doesn't go well.  The dean denies the need for their services and tells them the whole situation is nonsense.  Karen digs, and the Dean reveals to them that he doesn't have the loan secured for the remodel, nor does he have a construction crew lined up either.  The dean was hoping for construction to start as soon as school let out in another couple of days and to be finished by the time school started again.  So Karen and her brilliantness sets a plan in motion to get M.J. and her team in to do an investigation.

Now that the team have permission to do their investigation, they have one strict stipulation that can not be negotiated........they have ONE week to get 'er done.  After that is when construction will start, no matter what!  While this is going on, tension between M.J. and Steven starts.  Steven assumes he will be bunking with M.J., and M.J. needs her space.  During the investigation, M.J. continues to make Steven feel like he's a third wheel and to push him away.  She needs to focus, man!  She's up against a doozy of a ghost, poltergeist, what have you, and it takes a lot of her energy!!  And what's up with Karen??  Going off to Europe the first sign of a man, leaving the team alone!!  Don't even get me started on Doc!  This bird has thwarted poor Steven's attempts to be with M.J. as well!  It's like they're double teaming the poor guy!!  If M.J. doesn't want to date him, then just tell him!!!  Stop stringing him along woman!  Although I have to admit what Doc has been doing is pretty funny!  When Steven tried to convince M.J. to let him stay in her room, Doc started yelling, "Doc's lonely, POW!  Gilley come quick, Doc's been shot!  Doc's in pain!  Doc's going to the light!"  LMAO!!

During the investigation, M.J. discovers a child's remains, and when she contacts the police, Detective Muckleroy arrives with some deputies.  He is a very heavy skeptic and gives M.J. a really hard time.  When she finally reveals the remains, he still doesn't believe her, so she taps into her psychic abilities and discovers that the detective's grandmother and mother's spirits are present.  The jerk faints!  HAHA, that's what you get!  When he awakes, he is a true believer of M.J.'s.  Now with the detective on her side, they go forth with the snooping around.  The whole freaking town is very tight-lipped about Hatchett Jack which becomes very suspicious, but the team keeps plugging away.  It seems like slowly but surely they collect pieces a little at a time, not without difficulty.

The whole mystery of Hatchett Jack was just an awesome riddle.  What brought such intensity to the story was the fact that M.J. only had one week to solve it and nail Jack, along with helping the other ghosties cross over.  These poor souls were being haunted by Jack every night with him chasing them with his ax, hatchet, whatever.  The weapon keeps changing, or they keep referring to it as both, so I lost track.  On top of solving this mystery, M.J. was having to dodge Steven, baby Gil, and help other ghosts cross over that were coming out of the blue to her, plus getting her ass kicked by Jack.  As I entered the "showdown," I had to pee....I had 30 pages to go til the end, and I had little time left to do it in, because I had to go pick up the kids from school.  So I'm pushing through, screw it!  I can hold it through 30 pages, right?  My God!  That was the most intense 30 pages of a book I had ever endured!  As the urgency in the story unfolds, so does my bladder!  Steven is being chased by Jack with a hatchet, he's screaming HELP!, Gilley is yelling RUN!!, and M.J. is struggling to get the damn door open!!  I'm yelling, OPEN THE FUCKING DOOR!  Why did you wait til the last minute to pry open the door??  OMG!  At that moment, I swore I was going to wet myself....but no fear, as I held my breath with anxiety for the team, I clinched my bladder shut and read as fast as I could.  Oh thank you God when I reached the safety zone to stop reading!  I leaped off the bed, dashed down the hallway and I don't even think I shut the bathroom door as I hurried to the toilet and felt relief, awwwww.  I have learned a valuable lesson, don't load up on coffee before reading M.J. stories, cause they have too much drama, excitement, action, suspense, danger, and of course mystery to sustain a regular heart beat as it is!  Having reached the conclusion that I will be re-reading these books, I wish for a Christmas miracle and the whole series appears under the tree for me on Christmas morning, cause they will bring me life long enjoyment!


Did you find this review helpful, fantastic, or otherwise all around great?  Then Click +1 please, and follow me!
Posted by Kim at 8:29 PM