Book review on No Ghouls Allowed, (A Ghost Hunter Mystery #9) by +Victoria Laurie
A Paranormal Mystery Novel
**Book provided by the author for an honest review** 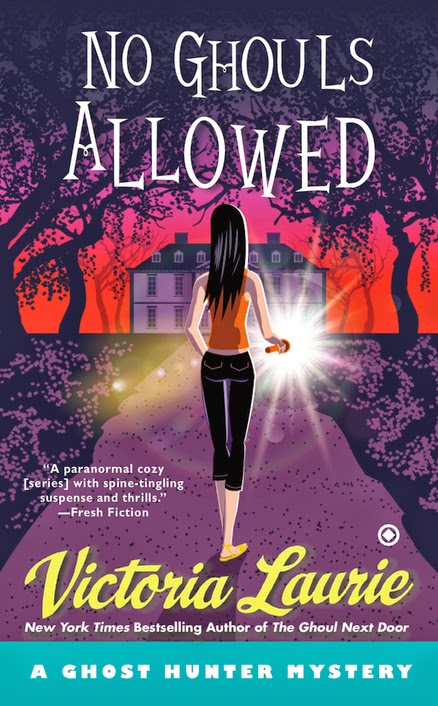 Blurb:  M.J. has had a distant relationship with her father since her mother died more than two decades ago. But when M.J., her boyfriend, Heath, and BFF, Gilley, take a break from their show, Ghoul Getters, and visit her family home in Valdosta, Georgia, they find Montgomery Holliday a changed man. The source of his happiness seems to be his new fiancée, the charming Christine Bigelow.

But despite the blush of new love, Montgomery and Christine are dealing with a big problem in the form of the antebellum mansion she is having renovated. After a series of strange accidents, the work crew is convinced the place is cursed, and the contractor has walked off the job. At Christine’s request, M.J. and her pals agree to find out if they’re really dealing with some spirited saboteurs and a possessed plantation home.

Review:  In this rarely seen 5 Fang review, this story is about medium Mary Jane Holliday, aka MJ, going home from Boston to "Insert any small town in the south", GA for her father's upcoming wedding to Christine, sweet as can be, Bigelow.  Along for the nuptials are MJ's beau, Heath, a hot and sexy medium as well, and Gilley, her childhood BFF.  Shortly after they arrive, like the next day, tragedy strikes, and MJ is pulled into a ghostbusting investigation while on vacation for her soon to be step-mother, Christine.

Christine purchased a house that had been a legacy in the town for seven generations, the Porter Mansion.  The mansion was owned by a very prominent family, The Porter's, which recently consists of  an elderly brother and sister.   The house was in disrepair, so Christine hired a contractor to do the renovations, and while they originally planned to be done by now, Christine has had trouble keeping a crew on site and has gone through a few different crews already.  After MJ arrives, the latest crew has an encounter of the third kind, just enough to injure one of the workers and scare them off for good.  They quit!  In play with this new development is MJ's emotional state visiting her father and being in her childhood home.  MJ lost her mother at a young age to cancer, and Montgomery Holliday, her father, closed MJ off emotionally, and they have remained very distant in her adult life.  Being in her house, seeing how daddy has upgraded the interior and how happy he seems with Christine puts a mixture of loss and regret in her that she wasn't prepared for.

As a first time reader of this series, I'm pretty sure it's safe to say it's a stand-alone read.  I felt very connected to the characters despite not knowing their past together.  Their didn't seem to have any holes in the story that only a follower of the series would know.  For the story line, I thought the whole idea was awesome!  Let me just say, there was an eerie similarity to the movie Salem's Lot with the creepy old abandoned house on a hill, previously owned by a nukinfuts family, that had some tragedy....HOWEVER, no vampires were involved in the making of this story.  The unique and unbelievable twist put on the story had my head spinning, heart pounding and tears flowing with the overwhelming grief and injustice that the characters, Sarah Porter and Madelyn Holliday, went through.  So lets talk characters...

Madelyn Holliday is MJ's mother, aka DeeDee.  As described in the book, she was also a medium, and grew up in Valdosta.  She was once best friends with Sarah Porter, even though her family was not wealthy like the Porter's but it was accepted because of DeeDee's sheer beauty, and mama Porter was all about appearances.  Despite the fact that Madelyn's own mother did not believe in her daughter's ability and treated her harshly, she grew up to be a very loving, caring person who adored her husband and child.  Her life was cut very short by that evil cancer bullshit.
Montgomery Holliday, MJ's father, is a lawyer, a no nonsense kinda dude, that had no idea his wife was a medium nor his child 'til she was an adult.  He was a very loving, caring father until Madelyn died, then he closed himself off, even to poor MJ.
Gilley Gillespie, is MJ's best friend from childhood and current research investigator on the Ghost Bustin team.  He grew up with just his mother who is a retired nurse.  He has daddy issues of his own, but we won't get into that right now.
Heath Whitefeather, is MJ's boyfriend and a medium who also works with her and Gilley on the Ghost Buster's team.  He comes off as well adjusted, kind and wise in his young years, and he loves MJ to pieces.
Mary Jane Holliday, aka MJ, is a medium who started her own business ghost hunting to try and help people and spirits so they can move into the light and give the living some peace.
The supporting characters are; Mrs. Gillespie, Linda Chadwick, Sherriff Kogan, and Deputy Breslow.  Mrs. Gillespie is Gilliey's mom and a second mother to MJ while growing up, as well as the person the trio stayed with while in town.  Linda Chadwick was Madelyn's best friend til the end and was also a mother figure to MJ after her mother passed.

The story about the Porter family and all their disgusting secrets was the main mystery MJ was trying to figure out, after she had an out-of-body experience (OBE as the experts called it)  involving her mother as a child.  What MJ had witnessed was so horrific, she couldn't let it go and was determined as all hell to find out what in the hell was going on.  This part of the story more than any other is what had me up in arms.  The secrets, there are always secrets!  MJ and her team where also deputized to help solve the murder that took place in the house with one of the construction workers.  This wasn't hard for me to swallow because of the nature of the murder.  It appears that not only were many unexplained objects moving, there was a possession involved in the man's murder, as well as the terrifying haunting activity taking place right in front of the whole damn police force, that scared them so badly, they had a hard time processing what they just saw.  The consistent flow of the story, as the events took place was as smooth as butter.  There was no page deemed boring, only action, after drama, after revelations were happening constantly throughout the entire book.  I was literally glued to the book the whole time with gasps and tears and OMG moments that had me stress eating potato chips and chocolate!  Now I know why you send the chocolate bars with your books!!  I felt like Gilley with all the ice cream he kept eating, LOL!  Now I have grease and chocolate spots on almost every page of the book!  It's forever mine now, haha..

I thoroughly enjoyed this book, and I haven't given a book 5 Fangs in awhile, but this one sure did deserve it!  So if you're looking for a little excitement in your life, pick up this book as soon as it's released!  It was like the television show Most Haunted but on steroids!!  Ya I know, I watch too much TV....But I love, love, love this book, and you can bet your sweet arse I'm going to be reading all of the books in this series now!

Available Now For Pre-Order On:

Did you find this review helpful, fantastic, or otherwise all around great?  Then Click +1 please, and follow me!
Posted by Kim at 1:02 PM